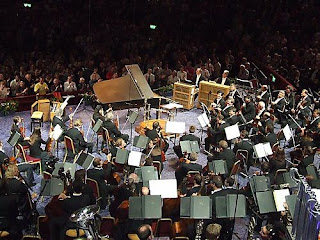 Very absorbed, me, in two amazing evenings with the Berliner Philharmoniker, currently visiting London, with its musical director Sir Simon Rattle. This meant Maher 4 on Monday and Mahler 3 on Wednesday, some 35 years since I last went to a Mahler symphony concert, at the Proms. 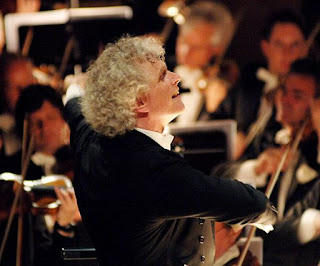 There is a fatal facility about recordings, fine as they are. The illusion, reinforced by the quality of the digital equipment on which we play them, is that they capture the music. Of course they don’t. They capture a sound impression of the music, but there’s so much more life and vibrancy in a live performance.

It is extrordinary to be in the same room as over a hundred of the finest musicians in the world, listening to each other, creating a joint pulse of something bigger than any of us or all of us, and feeling their way together through a shared adventure. I have no caustic critical words, not because evryting went perfectly, but because I was too absorbed to stand back and pass comment for fear of missing something. You can’t simultaneously swim a river and stand out on the bank commenting on the splashes and bumps.

And, frankly, there were no egregious splashes and bumps. Every voice in this orchestra has a wholeness and versatility to throw itself into different modes freely. Every voice that was a voice seemed like a musical instrument, free of intrusive ego, whether cool or soaring or cool supremely lyrical. Such mutual respect and understanding resolves the intensely activties of 120 soloists into more than the sum of its parts — a blended, poised, unity that is not uniformity, and brings out of each performer the best that they can be. The band is engaging not competitive, compelling but not coercive, and what it does feeds the soul.

Now how can our lives be made such music? When are we going to see a Church that does half those those things, half as well? And how?
Posted by Bishop Alan Wilson

bim bam bim bam. Just facebooked you on this!

There is nothing like live music. No matter how good a recording - it is still just a glimmer of what live is like. How lucky for you to see and hear this particular orchestra. I heard a piece on NPR the other day on Sir Simon Rattle working with young musicians - he is amazing.

I remember attending a performance of "Carmen" some years ago, in which the soprano who sang the title role was only a cut above mediocre. But in one of her arias near the end of the opera, She took off and sang magnificently. She soared. There is nothing like live music, and no recorded music gives you that kind of lovely surprise.

As for the church? Well, we can all pray for a lovely surprise.

Not long after digital audio came out I went to a session arranged by our studio engineer to show us the new kit and demonstrate its quality. When we arrived in the studio, he was a little flustered. He'd got three CDs and the vinyl editions of the same albums and had spent the afternoon trying to balance the system.

The trouble was, as he explained during the demonstration, that although the cds were indeed crisp and clear, free from distortion and remarkably detailed, there was something completely lacking from the end result. He'd even brought in a higher sampled recording of something else - this was even more detailed and it was even more apparent that something crucial was missing.

An atheist, he described the digital sound as 'soulless'.

I've kept my turntable and have been suspicious of perfection ever since ...