Anglican Covenant: Teapot on the Hob? 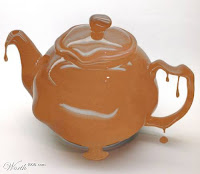 Since writing a piece for the Church Times last year wondering whether the Anglican Covenant was a Chocolate Teapot, dioceses have been voting on it. As things stand 17 have voted against and 10 in favour; voting across the board has so far been more than half against. So what?

Well, the Covenant may be, as the Archbishops say it is, a Very Wonderful Thing. On the  level of the Trades Descriptions Act, however, if more than half the people don’t buy it, there is no way it can honestly be seen as summing up the basis of their identity. At the very least it needs a trip back to the holy drawing board to turn it into something most people actually own. The matter speaks for itself, as the lawyers say.

When I wrote my CT piece I thought I would get a flush of answers explaining its virtues to me. No such luck.

What I got instead was concerns from all over the communion founded on fears it will turn the Anglican Communion into the kind of denomination where you opt in by signing up rather than turning up. Some will face legal complications — one Canadian legal officer estimated it would add $10K to law suits over land if the dioceses had to establish their Anglican credentials in addition to what they have to do now.

Meanwhile it's also clear as day that nothing in this document would make a diocese minded to make either a Gay Bishop or an African Incursion think twice, let alone desist. If the covenant goes through nice guys will use it to include people in; nasty to exclude those of whose behaviour they disapprove. The law of unintended consequences applies.

Some have expressed concern about the rather Tony Soprano phrase “relational consequences.” Yes, but everything we do impacts others, and thus has relational consequences. If the covenant goes through these will be more formal and bureaucratic at an earlier stage, that’s all. The Anglican Communion thrives relationally, but struggles bureaucratically. If you think a bit more formality at an earlier stage will build relationships, by all means vote for it. By and large my experience in all fields of life indicates that when you call in the lawyers it stilts and blocks relationships rather than builds them.

Similarly in soothing mode, I’m not sure the Covenant will be the abomination of desolation. The New Zealanders, for example, can’t sign it as one of their three constituencies has rejected it. They have a bad history of impositions from London and didn’t buy it. Does that mean they are now slow lane Anglicans? I’ve asked around, and the answer is, apparently not. This is comforting, but raises the Kenneth Williams question about the whole exercise. (“what’s the bloody point?”)

I shall listen carefully to the debate in our diocese. I can only vote for the covenant if those who support it can produce something very much better than tendentious waffle spiced by emotional blackmail to explain it.

The whole thing is foolish, and founded on a damaging control fantasy. Best give it a decent Christian burial and move on.
Posted by Bishop Alan Wilson

Thank you Bishop Alan, Yours is a Voice of common sense, peace and reconciliation, which is something the Anglican Covenant is not.

As I've said elsewhere, If I'd wanted a Pope, I'd have stayed with Rome.

The beauty of the Anglican Communion is it's ability to co-exist with differences, respecting each others integrity and joyfully journeying together with such diversity.

The Covenant would destroy that. No matter what the pro-Lobby say, Sect 4 is the 'Nut Cracker' and it will fracture the communion.

If people are unhappy with things as they are, the word of WW2 peace campaigners comes to mind "JAW, JAW, not WAR, WAR.

The interesting thing is that the Covenant appears to have firmed up division whether it is approved by all or none.

It seems that there is no specified number of Provinces that must adopt it before it comes into formal existence, but it comes into existence seperately in each Province as soon as it signs up to it.

So we already have a 2 tiered Communion, all the remaining Provinces are now deciding on is which tier they would like to belong to.

Over on Tobias Haller's "In a Godward Direction" a conversation has started about the future role of the Archbishop of Canterbury and it seems possible that it may well be institutionalised neutrality.

Alan T Perry writes about the complexity of implementing the Covenant, especially what happens when a church action has been found to be incompatible with it. It's a veritable nightmare ('Insert Catchy Blog Title Here', 29 February).

This bureaucratic mess will be with us for a while to come yet!

Amen, Bishop. In the debate in our Diocese and Deanery synods on this I was particularly worried by those who voted for it but said, in effect, " It probably won't make much difference, because we are Anglicans and we will just ignore it if it doesn't suit us, so we'll vote for it because it is nice to have links with one another." I felt like saying "be careful what you vote for; you may get it!"
It seems to me that if the Covenant has enough teeth to be any use we will soon find it that it will come back to bite us.

Could we devise a special liturgy for the burying of chocolate teapots and Anglican Covenants? Is it something you might be prepared to consider lay submissions on (since the whole body of Christ will be glad to lay both to rest). If so, may I join the queue at the top :)

We pray for the outcome in Oxford Diocese. (It is Cambridge that is the home of lost causes, so far as I remember?)

I wonder whether the next Archbishop of Canterbury will want to carry on with it? Whoever she is...

Thank you for this wise and forward thinking post. With this mornings announcement we don't know where we will be going now, but I am thankful for your wisdom. May more of this wisdom come to the fore in the days ahead.

V good. Thank you. Be very interested, with the "Yes to the Covenant" business evidently based there, to see how your diocese votes next week. And what, is any, effect "The Resignation" will have on all remaining votes.

Now that daddy (++Rowan) is moving out, is this the end of the whole covenant business anyway?!

Thanks, Alan. Whether in the end a majority of dioceses voted to adopt the covenant or not, the picture is of a very divided church. Certainly the proposed covenant does not offer the appropriate way forward for the Church of England.

Well said, sir, with the wit and passion it deserves. Peace and all good.

Oh, Brian, we definitely need clergy there to make sure it is well and truly laid to rest and does not re-emerge, vampire-like, to bite us, as someone suggested above!

I find the "Yes to the Covenant" website singularly unimpressive.

What's in the Covenant?
Haven't had a chance to read through the final version yet? Let us summarize it for you, and then you can print off a copy and enjoy!

"Let us summarize...", and, of course, if you don't take the time to actually read the text, just take our word for it. I've noted that proponents of the covenant rarely quote the text. If they think the covenant is the solution, why not quote the pertinent sections to back up their arguments?

The Covenant was (in good part) proposed to stop people like me ever leading churches in any major way, as far as I can tell. 'Tis odd, because I never knew that me telling people that God is wonderful, and that he thinks of us all as his beloved children and his friends, was such a damaging thing for our churches. Scary stuff.