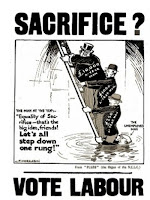 Cyril Badger, wily Reading parishioner (RIP1989) once warned me about the dangers of income comparisons based on percentages. Back in the sixties, said Cyril, it suited everyone to pretend percentages were the best way to rate pay increases. Managers liked them because they were simple and worked across the board. Trades Union leaders liked them because they appeared fair but preserved differentials.

The fact is, said Cyril, you can only understand any percentage if you ask “... of what?”

So let's just apply the Cyril test to the concept of fairness proposed by the government.

Let's imagine you're a cabinet minister with an income of £134,565. You spend modestly on heating and food every year and “fair” austerity conditions are applied to you — a 1% pay rise every year, in the face of 4% rises in basics. This year you spend £14,000 on food and heating (bear in mind you have more than one property to heat) with £120,565 for everything else, including tax. After five years your income is £140,028, and Inflation has raised your spending on food and heat to £16,378. This leaves £123, 650 for everything else — actually, just over a 2% rise in spending money! O Joy! And if that's not enough, you can easily increase your earnings with non-exec directorships and other casual earnings.

So, right off the back of the envelope, fair is fair. But it's a lot more fair if you're a Tory minister where tightening the belt involves limiting yourself to a 2% rise in spending money. It’s less fair if you're a pensioner couple facing a 10% cut, or a mother of two facing a 30% cut. Of course it will affect your children. How could it not?

The reasons bishops have said what they have is Maths, not Marxism. Go figure. I'd love to see a better model than the back of my envelope including housing costs, if anyone out there knows of one...

As to the feckless poor hypothesis, kudos to the Methodist, Baptist and United Reformed Churches for producing a report, the Lies we tell ourselves that introduces a note of reality to the discussion.
Posted by Bishop Alan Wilson

As George Orwell so famously said, "All animals are equal, but some are more equal than others".

Politicians' maths are not quite like those of the rest of us.

An excellent article. This should be circulated around the House of Commons!