Good Friday: Into the Vortex 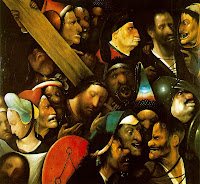 Good Friday. As he leaves the upper room, the Gospels suggest, Christ allows himself to fall into a swirling vortex of cause and effect over which nobody can have an
y control. The King of the Jews gives himself up into the hands of his enemies. He surrenders to an overwhelming chain of events.
The disciples, the priests, the procurator, the soldiers all think at different times that they are driving the story, but they are wrong. Nobody fetches up in this story where they want to be, but the faith says that everybody ends up where they need to be.

Good Friday is a good day to explore Rachel Mann’s new book, Dazzling Darkness. It’s beautifully written, easy to read but not an easy read. Rachel bears profound personal testimony to her adventures, struggles and falls on the edge of gender, identity, and illness. She tells the story with severe realism. She embraces faith in community not as the resolution of all doubts and loss, but as a state of being lost and found all at once, work in progress.  Her narrative does not blink at the tragic dimension of living on the outside, but embraces it in the hope of a better resurrection.

The edge, the liminal zone, is where that resurrection happens — not the reversal of death, because the most identifiable thing about Jesus’ risen body are the scars, the marks of embracing not evading death, of having been sucked into the vortex and out another side that is infinite. 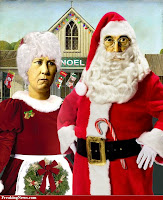 It may be that what makes organised institutions of faith difficult for so many people today is not their eternal tendency to take themselves too seriously — something Jesus experienced, at whose hands he suffered. That’s always been part of the mix.

But the punters have rumbled the fact that neat, Pooterish, God-in-a-box Moralism, however convinced it may be of its own consistency and worth, is a poor substitute for life in all its fulness. Part of that fulness is loss, pain and uncertainty, as well as hope, beauty and joy.

This is a book to read and re-read. I have a bad habit of underlining potentially helpful sections of books I read on the Kindle. I found myself underlining most of some chapters of this one. Rachel’s a poet as well as a philosopher by instinct and training, and it shows. So I leave the last word for today
to her:


In Jesus Christ, God embraces human life and shows us — in the dark night of rejection, of unjust violence, of the loss of his friends as they run away, and most particularly in the Cross — the mystery of hope and love. And most of all of forgiveness....
If the Christian life is about participating in the Divine Comedy, the actual living of it so often has the character of tragedy. And in the tragedy lie the pity, the hope, the weight, and, sometimes, the beauty.


Note 1: American Gothic Christmas by GarRobMil of the Independents

Note 2: Kindle users need to download Rachel's book as a MobiPocket edition from here, then transfer it directly by wire (i.e. as a private publication) to their reader.
Posted by Bishop Alan Wilson

A superb book; I received a copy for Christmas. Should also be available from any Christian bookshop, though I guess most will need to order it in rather than actually hold stock, unfortunately...