Persecution, Paranoia and Pluralism for Pot-Plants

Holy Saturday brings what the Daily Mail calls an Astonishing attack on the Prime Minister by Lord Carey. I was not astonished. The timing is plainly the Daily Mail’s, to embarrass the government as much as possible. Apparently two thirds of Christians now feel they are a persecuted minority — or at least they did fifteen months ago when the fieldwork for this survey was conducted.

Since almost 60% of the population self-identified as Christians in the 2011 census, it's hard to see how the basic maths of this notion could possibly be substantiated. There are Christians in some parts of Africa and the Muslim world, for example, who actually do experience persecution. This does not consist of some politicians, including Christian politicians, disagreeing with them, but losing jobs, homes and freedom. Any comparison with them seems, to put it mildly, tacky.

Apparently UK persecution consists of having to tolerate the fact that many people don’t share their narrow interpretation of the Bible, including many if not most other Christians.

So what basis could there be for the factually tendentious feeling that Christians are persecuted in the UK? Perhaps top-shelf reactionary religion, in itself, can engender its own nightmares. I turned to the memoirs of Frank Schaeffer, talking about the anxieties of his Fundamentalist childhood: 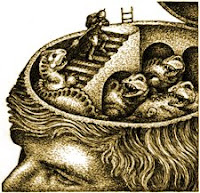 We Schaeffers never compromised. At times it seemed that only God knew how important we were, how right, how pure.

But isolation and rejection by “The World” only confirmed our self-importance.

The sense of being like the tribes of Israel wandering the desert, with enemies on all sides, was the underlying reality of my childhood.

I think it was shared by my three sisters... Susan took grim satisfaction at the looming damnation of just about everyone but us. Debby wept and redoubled her efforts. Priscilla got nervous and threw up. I hid. 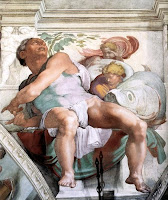 Conservative Christians are people of high integrity and seriousness. I believe them when they say they do experience  marginalisation. In the good old days their  social mores, backed by the criminal law and psychiatric practice, absolutely ruled the roost.

Cultural development since 1945, for better or worse, has left many conventionally minded Christians dazed and confused. A character in John Osborne’s Look Back in Anger says of her father — “Poor Daddy. He’s a pot-plant left over from the Edwardian high summer who can’t understand why the sun isn’t shining any more.”

Where does this marginalisation leave them? basically in the same position as the rest of the population.  Conservative Christians have a right to hold and express their views and be heard with respect like anyone else. That does not require everyone else to agree with them. Some people, most people, including other Christians, may well disagree with them. Nor does their right to be heard give them moral high ground from which to curtail the rights and dignities of others. They simply have to take their chances with everybody else,a nd be judged on the merits of their case.

That is not persecution. It’s reality. It’s Democracy.
Posted by Bishop Alan Wilson

Yes, perhaps "persecuted" is too strong a word; but "marginalised" is not strong enough. Traditional Christian values are not only being attacked by politicians - they are being attacked by liberal bishops and clergy within our own Church. Anyone who disagrees with them is in danger of being labelled a bigot. And that kind of intolerance may eventually lead to real persecution. So to redress the balance a little, I am thinking of forming a "Grumpy Old Bigot's Society." Would anyone like to join me?"

Well said. Scripture calls on believers to do justice, love mercy and walk humbly with their God. That same instruction to the faithful is in the sacred texts of all the world's major religions. Perhaps what we have in common is far more important than anything we may disagree about.
There's another text that I think about when I feel (usually wrongly) that I am being persecuted - all through the New Testament it says "Fear not". Works for me.

In case anyone missed the reference: http://www.youtube.com/watch?v=auDv6cf2PBM