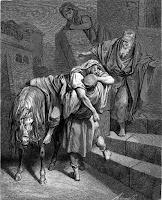 It was a hot day, and the Levite and Priest were delighted to find a country inn at a bend in the road where they could stop for a drink. It was cool and shady, and a great place for a bit of Temple talk on the way up to Jerusalem.

Supping up, they saw two figures coming up the road — a traveller and his donkey, and on the donkey was what looked like a heap of bloody rags, but, they could see as the ensemble drew closer, was actually the unconscious body of a man who had fallen among thieves back along the way.

“We must have passed him on the road. Thank God we're safe!  But however did we miss him?” asked the Priest.
“I was praying a Psalm of Ascents” said the Levite.
“I was working up a speech for the Sanhedrin,” said the Priest. “well at least he got picked up”
“I know,” said the Levite. “But look who by! A Bloody Samaritan! — Out of the Frying Pan into the Fire?”
“Now, now,” said the Priest. “But look, the silly man’s put the filthy beggar on his donkey, like one of us. And he's given him his purse. He doesn't even know where he’s been. I ask you!”
“And now they're stopping here!” said the Levite. “By the Beard of Abraham! Time for us to move on!”
“I don’t drink in Samaritan Taverns, that’s for sure,” said the Priest, “That fool of an Innkeeper seems to think those dogs are equal to real children of Abraham. Not that Publicans ever were that hot on Real Theology.”

So the two Holy Men moved on, with a mental note to get the Innkeeper’s licence checked, and an AOB warning to the rest of the Sanhedrin to drink somewhere else for the next three years.

After all, they agreed, with Palestine Secularising the way it is these days, they had to do something to show that there is a God in Israel...
Posted by Bishop Alan Wilson

Very well put but I am a little sad that we in the Church of England are now cast with the Sanhedrin rather than the Samaritans. I applaud your attempts to highlight the people not the principle and pray you continue to do so.

We need a re-appraisal of what we Anglians stand for - either a rigid adherence to "doctrine" or a return to God's all embracing love.

I'm rapidly coming to the conclusion that the Primates who voted to suspend the TEC from some functions in the Anglican Communion (expecting them to repent their calling from the Holy Spirit) are actually doing them a favour.

They can now proceed with integrity, without external interference in their internal affairs from a lot of dictatorial primates, whose sole motivations seems to be discriminating in the Name of God.

Not in my name.