The Episcopal Church welcomed me 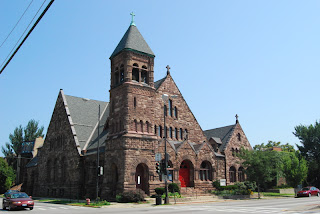 Morning worship at Epiphany Chicago, a parish with a troubled past (including a high churn rate of clergy) now being led into more fruitful places by the Reverend Meigan Cameron, priest and congregational developer. Situated on S. Ashland, one half of the parish is gentrifying, the other is the Mexican Barrio, with big social and healthcare challenges. About 50 there, good for August, with one of anyone, racially, in age, experience wise, with many younger people, couples and singles.

Having pulled Meigan's leg about the faded inscription from 1881 over the North window ("Goodwill towards Men" is all it says), I gathered that this was not quite the whole message at Epiphany these days. So what is? 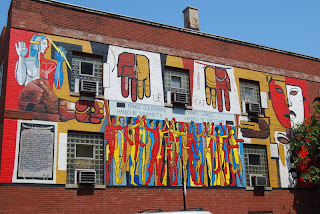 "Jesus comes to remind us to pay attention to our neighbour: who's at our doors, and what do we do about that?"

"Being connected to the community made it possible for me to stay on the journey" (about a kind of near death experience whilst out running, where friends from Church got her going again and helped her through)

"Through our lives and by our prayers your kingdom come..."

Epiphany came over as a supremely real, improvisatory and earthed community of disciples, deeply engaging with their context not so much by throwing money at it or hiring help, but by living the gospel for themselves as a whole life thing on the streets. They've got big problems, but faithlessness isn't one of them. And you get melon at Coffee hour.

One sign of an excellent Church may well be the excellence of its facilities and electronics — why not? — but another, maybe more significant, is the way it interfaces with its context as a blessing and sign of hope. 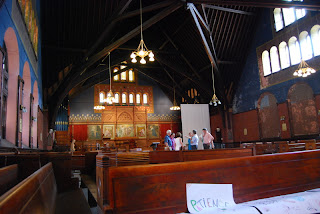 A lot of English reporting about the Episcopal Church sees it entirely in terms of its internal politics, sometimes through lenses supplied by the dissidents from its cave of Adullam. They say it's lost its way, and is declining into a mushy liberal la-la land. Maybe some of it is. I don't know. But the Episcopal Church also has people out on the barrio, taking bullets for the kingdom, and giving all they've got to seek justice, and build a new community which challenges the complacency and blindness around it, by thinking different and living different. They may not always get it right, but they do what they do because of the hope that is in them, and they love the Lord as they seek to live out kingdom values. 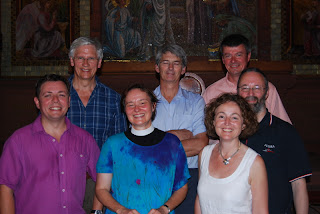 The Lord's grace is over all his works, and he surely knows his own, and is not ashamed to call them his friends. Whatever the politics of it all, it would bless everyone, including the English, quite frankly, to give this lived kingdom reality a bit of damn respect, instead of ignoring it or patronising it. I will probably read lots of slick Willy spiteful comment about the Episcopal Church in the coming year, but I hope through the lens of the love and commitment to kingdom values on the ground I experienced here, not the other way round.

This brings me back to a question raised at the Summit by Michael Porter of Harvard — when we call ourselves community Churches, how much is this about real people out there, and how much about us, and how real and focused are we about this aspiration?
Posted by Bishop Alan Wilson