Alan was born in Edinburgh, grew up in East London and Kent, and studied at St John's College Cambridge (Open scholarship in history, BA77 MA80) and then Balliol College Oxford, where, under the supervision of Peter Hinchliff, he completed a doctorate in modern historical theology (DPhil 89). (The Theology of Church and Party of Anglo-Catholics 1880-1914, with special reference to the Church Crisis of 1898-1903). He trained for ordination at Wycliffe Hall (Cert. Theol. 1979). He was ordained Deacon (1979 at St Peter’s Didcot), Priest (1980 at Christ Church, Oxford), and Bishop (2003 at Westminster Abbey)

Alan has served in the Diocese of Oxford since 1979, at Balliol College 1979-81 and NSM at Eynsham, then Curate of Caversham & Mapledurham (1982-89), and first incumbent of St John the Baptist Caversham from 1989-92. There was a Crematorium in the parish. Visiting several thousand families to listen to their stories of relatives and friends who had died was an education in the things that aren’t on the school curriculum. So was his work as a chaplain at Reading Prison, (1990-92). He also led various extramural courses in Applied Ethics and History for Reading University. He is a contrbutor to the New Dictionary of National Biography.

Moving to Sandhurst as Rector in 1992, he contributed to continuing ministerial education by developing residential training workshops in supervision skills for training incumbents, and as a Diocesan Work Consultant. This involved developing a supervision model for ministry (Promoting Wholeness, 1996), parts of which survive as an article in Keith Lamdin and David Tilley, Supporting New Ministers in the Local Church: a Handbook (2007).
In the mid nineties, Alan undertook  commercial design work (airwaybills, contact lens containers and packaging products.) He led the planning group for the Diocesan Convention at High Wycombe in 2002. He was Area Dean of Sonning from 1998-2003, and honorary Canon of Christ Church, Oxford 2002-3. In October 2003 he became Area Bishop of Buckingham. 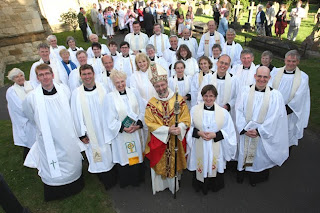 Alan has a long-standing interest in human rights and equality. In the Oxford Diocese, Alan has chaired the Board of Social Responsibility, and the Diocesan Committee for Racial Justice. He is link bishop for the European officer of the diocese, and has regularly visited the German Kirchentag. He is also a member of the Oxford Partnership for World Mission, and is actively involved in the diocesan links with the Diocese of Växjö in Sweden, and Nandyal in India. He also helped set up an educational development link in India, as a founder trustee of the Oxford Nandyal Education Foundation.

Alan  led the implementation groups for Terms and Conditions of Service (Common Tenure) and Ministry Development Review for the Oxford diocese, and currently chairs the Diocesan Board of Mission Mission in the World group. For five years he was episcopal member of the Diocesan Child Protection Group.
Alan has long a long standing interest in new and social Media and their impact on the rest of life. writes for the Guardian’s Comment is Free website, and has, since 2007, produced a blog.

Alan is Chair of the Oxford Diocesan Board of Education, with 281 maintained schools in the Thames Valley, serving some 52,000 school students.  He serves on the Council of Wycombe Abbey School, and as associate governor of Cressex Community School, High Wycombe, a national challenge school which has been evolving into a Community Trust in collaboration with the Co-Operative movement. He is a governor (and former Chair of Governors) of the new Chiltern Hills Academy and a founding member of the Slough and Eton Church of England Business and Enterprise Academy Trust. He is a Trustee of the Wisodom project, a joint creative initiative with Eton College to enable interfaith dialogue among young people. He chairs Art Beyond Belief, an innovative interfaith education charity. He is Chairman of Christians Aware, a national Charity based in Leicester, that exists to foster cross cultural and interfaith understanding through visits, conferences and publications.

Alan was a founder member of the Ethics Committee of the University of Buckingham, 2009-10, where he has advised a PhD student in the business school, and has been involved in the new chaplaincy and a move to bring the study of theology into the University. In 2010 he was appointed as a Visiting Professor there. He is currently working on a book commission about Marriage Equality.
He is a member of the Council of Christians and Jews, the Howard League for Penal Reform, the Wyndham Place Charlemagne Trust, and the Ecclesiastical Law Society.
Alan is married to Lucy, a violin teacher, and they have five children aged between 28 and 15 (Catherine, Stephanie, Stewart, Nicholas, Anna). Together they help lead Engaged Encounter weekends for couples preparing for marriage, and Alan is the Episcopal contact for the charity. He is also a patron of Explore, a charity that introduces school students to volunteer married couples to share the realities of married life.
Alan’s interests include history, film, art and design (Royal Academy & Tate), leadership development, Benedictine monasticism (Saint-Wandrille; Alton Abbey), photography, singing, tehnology, running and France. He speaks various languages badly, having learned from his Hungarian mother the value of understanding other peoples’ conversations rather more than they think you can.