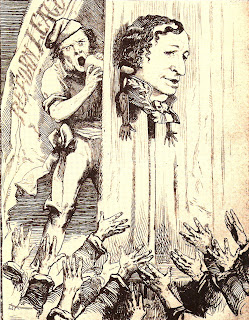 The comprehensive and informative Thinking Anglicans, carries a story from Pat Ashworth in the Church Times, based on Computer Data of a recent "personal" statement by Archbishop Peter Akinola. Most of it appears in fact to have been penned by US and UK Traditionalists. TA also gives US satirical comment. The statement on TA from a Nigerian press officer resorts to every junior brief's desperate last resort — the suggestion that his client may in fact have been circumstantially at the location, 3,000 miles away, using his friend's computer. Like you do. Chelmsford Anglican Mainstream posts instructions to prevent getting caught this way again. Not that they'd do it again, of course, but inquiring minds want to know.

The prima facie evidence is as sure as a speed camera. No point arguing the facts, but Does it matter?

Victorian politicos didn't have Microsoft Word, but experienced this predicament (left). Surely clergy, trained as we are on J, D E & P, should be able to cope — very few of us ever have a truly original thought. Archbishop Runcie, famously, used Gary Bennett (the mercurial tragic Oxford Don, not the back-up catcher for the St Louis Cardinals) for his stuff. An Australian RC Archbishop was caught earlier this year using Terry Eagleton's brilliant LRB review of Dawkins' book without, er, quite having time to acknowledge his source. We juniors, by and large, have to write our own stuff.

Historically, it's useful to know which "Global South" stuff really comes from the "Global (wild) West", but as a student of leadership I wonder, does getting other people to write your personal statements really matter, and if so, how?
Posted by Bishop Alan Wilson