Signs of the Times in Stroke City

Nope. It's still there, Derry, in spite of all the confusion on this subject at Northern Ireland Railways. 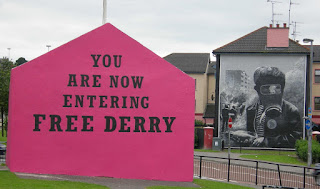 But things are moving forward... The famous Free Derry sign is looking what Noel Coward would call "terribly Pink."

Work is also being done to incorporate some jolly stone-throwers and a Bernadette Devlin MP lookalike, armed to the teeth with, er, an official IRA Megaphone. Prods, of course, don't use megaphones. The Revd Ian Paisley proved conclusively years ago they don't need them. 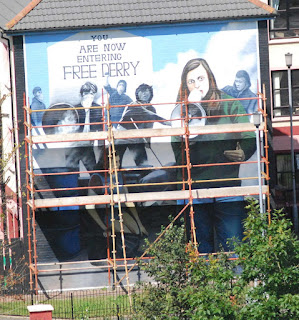 The whole City has also been working on its image. In various places around the town its cheery traditional (and deeply symbolic, you may feel) coat of arms: 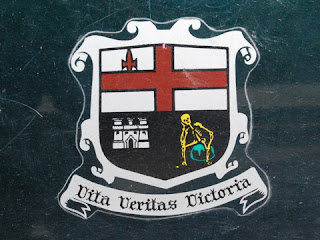 is giving way to the following namby-pamby rebranding, including the D-word: 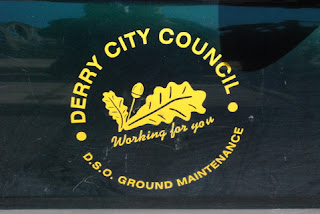 Incredible as it may seem, the times they are a'changing, even in London/Derry, which some are beginning to call "Stroke City" — an ingenious way to name the place without annoying anyone, except the medical profession, perhaps...

Progress may disappoint a Mexican tourist I encountered up on the walls who asked me if I knew where she could find "Bloody Sunday." She seemed rather put out when I told her she had shown up 35 years too late. She seemed to think it was a regular local custom, like the Olney Pancake Race. Which, of course, some of the locals seem to think it is, too.
Posted by Bishop Alan Wilson