Unity and Community on the hill in Amersham 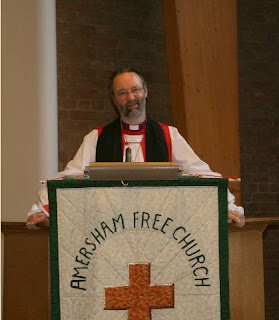 Last Sunday brought the privilege of preaching at Amersham Free Church. Having been baptised by the Kirk, I can usually recognise Scots Presbyterian DNA in a congregation (regular Highland Country Dancing is a real give away). 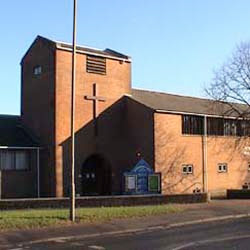 AFC is URC, and Baptist. "How long had they been living and serving together?" I wondered (expecting the answer "1970" or thereabouts) — answer, since 1907!

So hard on Ecumenism in the UK, unlike sexual intercourse (according to Philip Larkin), did not "begin in 1963, somewhere between end of the Chatterley ban and the Beatles' first LP"! These "Union Churches" have been honouring the product more than the brand, and integrating Church life with toher traditions, for far longer than I'd thought. St Michael's Amersham had been sharing worship and accommodation during their recent building works. A week after they moved back home, AFC was missing the blighters already!

There was a baptism during the service, and a challenging Gospel about taking up our cross and counting the cost of discipleship (Luke 14:25-33). Faith here isn't "Christianity Lite" but a lived "all risks" thing. 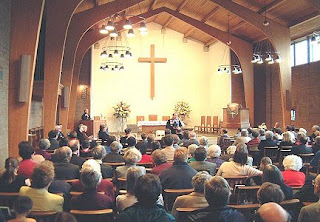 It's a shame if the classic Free Church tradition that has been a great cultural and religious force most places in Bucks since the seventeenth century has become slightly foxed in some places over the past thirty years. Not here!

This congregation doesn't exude Sooty Show fireworks, but it prays and learns together and tries to live the gospel.

It was a real honour and a pleasure to share in ministry with the Revds Andrew Busby and Erna Stevenson, and I was very grateful for the opportunity.
Posted by Bishop Alan Wilson