England & Wales now leads Europe and is rising fast in one of the most bizarre global superleagues — the number of Children in prison, reports the Howard League.

The numbers are shameful and increasing. Despite a 44% decline in crime and no evidence of any increase in crime committed by children, we lock up far more children in England & Wales than any other country in Western Europe. In 2005 we jailed 2,274 children, compared to 1,456 in Germany, 628 in France, 73 in the Netherlands, and 9 in Norway. The latest annual England & Wales figure is 3,012. 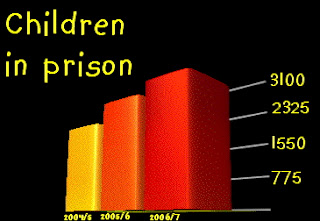 You can blame the government, and we probably couldn't produce such depressing figures without rudderless initative-itis in our criminal justice system, along with structural anti-family bias and discrimination in all areas of social policy.

But the real answer has to be... ourselves. We get the governments and media we deserve, and if we don't like the children our unrelational, often anti-relational, society is producing we need to look long and hard in the mirror first, and ask what has to be different, and where does the change have to start?
Posted by Bishop Alan Wilson

It would be interesting how that compares percentage wise. How many of the young people are imprisoned. Is it that crime rates are lower in other countries or that we treat them differently?

It's an interesting question, Sarah. In the grossest terms there are 52m people in England and Wales, 64m people in France, 82m in Germany, 16.5m in Holland.

Crime rates are generally lower in all these countries. How this relates to numbers in prison is a bit of a chicken and egg one.

Yes, we do treat them differently. In particular the German system is very much more about keeping people in formal education than ours and the recidivism rates in all these countries are significantly lower than ours.