Wrestling with angels up the A1 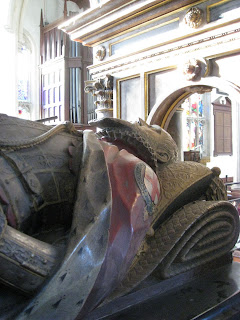 Stamford last Sunday to preach the Burghley Sermon. In 1581, William Cecil, Lord Burghley, Queen Elizabeth I’s chief minister, endowed 24 scholarships at St John’s College Cambridge. Ever since there has been an annual sermon , with mayor and council and descendants of the founder. Many thanks to Miranda Rock, Director of Burghley House, for lunch. Burghley is a refreshing antidote to cheesy theme park “heritage”. The house is well managed but still, at heart, a family home rather than a museum, with a sense of fun as well as history. 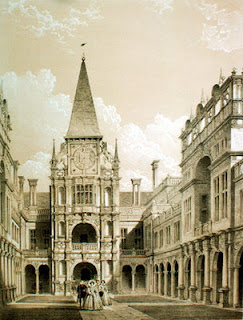 The ancient bidding prayer gives a living snapshot of the Elizabethan Church settlement — “the holy Catholic Church, particularly that pure and reformed part of it established in this kingdom.” It doesn't rubbish others like the puritans, but it implicitly denies that Rome is the franchise holder for all Christianity. By “pure” it doesn’t mean “excluding impure people” but “stripped of recent accretions.” The word “Anglican” is nowhere to be seen — but of course it wouldn’t be, since it was invented in its present meaning by Gladstone in 1838, I believe.

The Old Testament reading was about Jacob wrestling with a stranger — Shallow people think that pain, contradiction and struggle in the Church is, in itself, wrong. Before his encounter at Peniel, Jacob sought blessing by deception, manipulation, hard work, diplomacy, even brute force. He received the blessing he sought, not in the way he had planned it, but by being broken. Pain, struggle and uncertainty, far from being some dreadful failure to manage things smoothly, is the normal condition of an emergent community experiencing the blessing described in Genesis 32:

Ring the bells that still can ring.
Forget your perfect offering.
There is a crack in everything.
That’s how the Light gets in.
Leonard Cohen Anthem.

that's close to home for me! My family moved south to Stamford when I was a kid, and I went to the school that borderst he Burghley Estate. We used to spend lunchtimes in the park sometimes. Much later my Mother was Mayor of Stamford (which was turned into Middlemarch for the BBC series)

Did you see the amazing painted ceilings at Burghley House?

Life is getting seriously like some kind of conspiracy thing in the Twilight zone. Yesterday Richard turned out to have come from the Croxley Green church used in that silly Mitchell and Webb thing about nasty vicars...

Didn't get to the ceilings this time, but made it to the wine cellar!