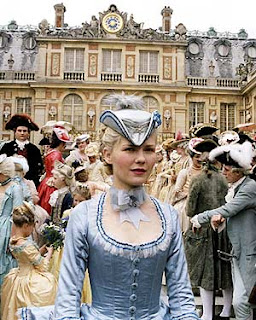 Proud father of three daughters (like King Lear), I have to try and keep up with developments in Female Film, so I picked up Marie Antoinette off the post Christmas cheapie shelf. This could indeed have been the ultimate chick flick. Kirsten Dunst as an airhead Barbie princess should be a storming no-brainer, on a par with casting Skippy as a Kangaroo. Actually her performance is genuinely formidable, all the way from tearful teenager missing doggie to Ladette / Bo Peep young mum. Like Lady Di she’s a blonde bird in a gilded cage. Unlike Lady Di, she manages to keep her pecker up but flunks her charity work. It’s not her fault the movie fails. Design is wonderful. Sets, for once, are real and far better than CGI. Costumes are to die for. Soundtrack works brilliantly. The whole thing is seasoned by marvellous cameos, including Austrian Empress Marianne Faithfull (sans Mars Bar).

Unfortunately all this just isn’t enough. A lovingly accurate biopic about someone whose life was consumed tragically by Ennui can easily become rather boring. A great movie needs a great script, not just a collage of soundbites. There has to be conflict and/or tragedy. Actually this story contains plenty of both, but it’s so well hidden that few punters stuck around long enough to get enough of either — This movie was a box office bombe surprise. 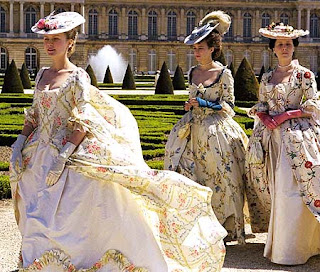 Great movies also need strong enough characterisation for the audience to care what happens to the people on screen. Unfortunately, to cite one invidious comparison, there’s more hot human interest at teatime on a wet Thursday afternoon in your average Jane Austen Vicarage than the entire galactic court of Versailles seems to have been able to drum up in ten years. It’s a novel interpretation of the French Revolution, but perhaps the peasants just got desperate to make something interesting and different happen. 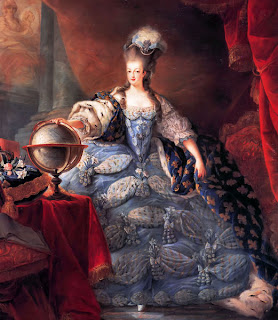 The decision to miss out any before and afters was a bad call. OK, you don't get anything about Marie Antoinette’s childhood because she was only a teenage bride, whose pedigree mattered more than her character. OK, Versailles was a bubble so she didn’t get to see any great events unfold in Paris — why should we? But just as one longs to see the whole thing unravel and a clotheshorse redeemed by mother courage, pride and resilience, the movie ends. Titanic would be less than half the movie it is, even with its sets and cinematography, if it ended with Rose saying to Jack over coffee and licquers “It'll be a bloody tragedy if this lot sinks tonight.” Without the ship actually going down, officers shooting toffs, decks flooding and lights fusing, there's something very fundamental missing from the whole experience.

Eat your heart out, Autrichienne. Kubrick’s Barry Lyndon remains the 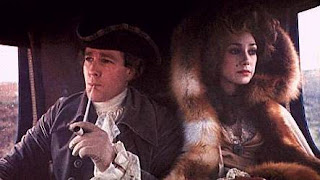 Guv’nor for Eighteenth Century Ennui fans. Although it unfolds at an obvious stately pace, there’s a story, and a variety of things happen to characters it’s possible to care about if you try hard enough. Best use for this one is wallpaper for a theme party. But perhaps that is the truth about Marie Antoinette.
Posted by Bishop Alan Wilson