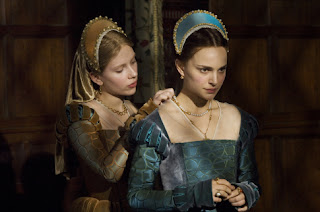 Stewart hauled me off to see The Other Boleyn Girl, which was surprisingly absorbing and enjoyable. The history is slightly tendentious, but it’s a terrific costume romp, with a better than average script, emotionally engaging characterisation and great acting. Centering it all on two Boleyn girls provides a Buy-One-Get-One-Free treat for dirty old men. Not that I'd know anything about that.

The key to all Tudor history turns out to be Anne Boleyn’s jolly decent and much nicer sister Mary, the other girl with a pearl earring. Do not misunderestimate anyone capable of giving Henry VIII a male baby. 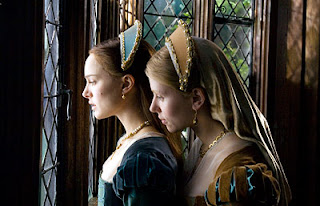 Thus doth Mary out of unfeigned love, but also, sadly, out of wedlock. With Mary parked in a siding producing the goods, Hank gets hooked and bedded by cunning-little-vixen Anne. Consequential Bluebeard activity produces not a male heir, but England’s greatest monarch — and, wait for it, it’s a girl! By which time Hank has moved on, leaving in his wake the original desperate housewife. 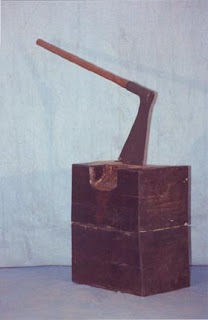 There’s a kind of crypto-feminist moral here. Girls! If your bent old wicked uncle fixes you up with Henry VIII, be very afraid. Even as a sprightly Bantamweight, Hank in bed is bad news. Mother warned you all along: You are in serous danger of losing nine inches off the top. But as that big sword of state swings towards your little neck, you have the consolation of knowing that you have laid the foundations for future national greatness, including, let's not forget it, the dear old C of E. Remember the other tip Mother gave you. If in doubt, even on the block, lie back and think of England.