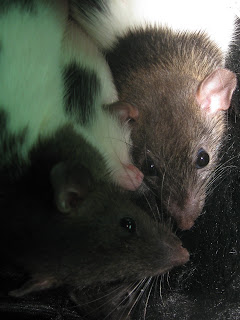 I came home last night to find we are now sharing our home with three rats — Pedro, Felix and Orio. A lot of people don’t like rats, but I gather they were terrifically popular in the fourteenth century, and Max the Cat says he likes little furry animals. And they can do such cute things. Pedro does Bubonic Plague, Orio will handle the bins, whilst Felix spreads Weil’s disease. The lads arrived with an accompanying book called How to Care for your Fancy Rat. From it I learn that

In 1974 Geoff Izzard and Joan Pearce met at a show in London where a few fancy rats were on display. They joined the London and Southern Counties Mouse Club, the only Club in the United Kingdom that still staged classes for fancy rats. They showed fancy rats throughout 1975, attracting more fanciers until, on 13 January 1976, they founded the National Fancy Rat 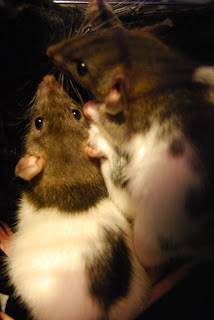 I wonder how Geoff and Joan attracted new fanciers in 1975. Perhaps they just left leftovers near the back door. I always planned to overcome rodentophobia in gentle stages, say by way of voles and mice. As it is I find myself an overnight full blown rat fancier. Accompanied by a lusty cockney chorus, à la Italian Job, of “We are the rat appreciation So-ci-et-y,” I now have the facility to discover my inner rat.
Posted by Bishop Alan Wilson

My own Rat, called Gerald, hangs out on my blog page and thinks he is a very cool rat! I don't mind as long as he behaves himself and remains under supervision. His girlfriend plays tennis and wants more equality so I ask her why do women only play the best of 3 sets in tennis and men have to play the best of 5..? Have you ever seen a rat play tennis? They are as elusive as females Bishops at the moment!

As a former rat owner I can reassure you that rats are one of the best animals to have as a pet. They are awake during the day. They are easy to tame and very rarely nip.

My only warning is that:
a) when they are kept in single sex groups they act in ways which wouldn't be in keeping with the Windsor Report
b) they have a tendency to die hideously of cancer

If it helps maybe you should just think of them as squirrels with bad PR.

Tidings of comfort and joy! What raised my anxiety level was how we ended up with three. Stewart, nicholas and Freddie bought two, then Freddie asked “Do we get a discount?” No you don't, said the sop person — but you get another rat... scary, or what?

Interestingly, as you are heading for Canterbury, there is a pretty good band there called Hot Rats! Watch for them at one or another of the local pubs.