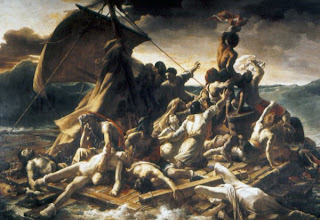 Steve Hollinghurst works for Church Army in Sheffield, researching the cultures of people who don’t go to Church in the UK. He came to our local Deanery Synod last night with simple facts and figures about post-Christendom England. 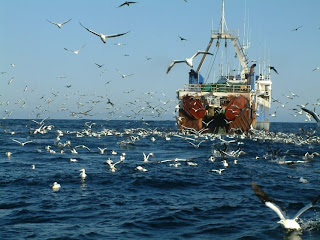 So what do we do? We could retreat fast into the bunker, clinging on to what we fondly imagine were the certainties of the past. We could get the wagons into a circle for vigorous “Judaean People’s Front” debates around then camp fire. Alternatively, we can get the wagons out onto the trail, and see who we meet along the way. Where we decide to do the latter we will find ourselves needing the same kind of utter versatility St Paul talked about in I Corinthians 9 — Greeks to Greek, slave to slave, Jew to Jew. We need to distunguish clearly the gospel from its cultural wrappers. It’s a simple story — love is strong as death.

The picture reminds me of Eric Cantona: "When ze seagulls follow ze trawlair, it is because zey sink fish will we srown into ze sea."

Those who don't go to church are certainly a concern.

What of those that can't go to church, though - because of accessibility or poverty, for example? Or what of those who go to church and find the attitude is, "We wish you weren't here"?

It sometimes happens. People who are the 'wrong' colour for that church, or who have the 'wrong' sort of relationship to someone, or who are single parents, or who have a disability or disfigurement that causes concern, or who turn up in the 'wrong clothes' or don't know the rules for that church and end up upsetting someone. It can be more like the 1000m hurdles when negotiating the social expectations in our churches than a peaceful and spiritual experience for newcomers. Outright prejudice may be rare, but some congregations can achieve much by simply and persistently ignoring people they don't want there.

If we can find a way to make our churches wonderfully welcoming, we'll have solved much of the situation. The new 'tourism officers' for Dioceses might be a good start?

How we live and show our lives is important, what is it about us that is attractive and would make others want to find out more? There are many more questions we need to ask ourselves, as it is us that has the great commission and the responsibility to share the Gospel. We should not blame the lost for being lost, we need to look in the mirror and and be truthful about our faith and how we can make it relevant to the here and now. Alpha suppers are good but maybe there is more we should be doing?

Having spent the last 3 out of 4 years at Wilson Carlile College (Church Army) I know Steve Hollinghurst's diagnosis of the Spiritual Britain well. He is right in spelling out the curiosity in spiritual things.

Where I am working, for example, interest in and practice of spiritualism is rife.

We do however disagree on how to tackle this. For me, it is important to put 'old fashioned' apologetics into practice and talking about the Law as well as grace, tackle the problem head on.

In a few months of doing this we have had one lady repent of her involvement in spiritualism as she came into relationship with Jesus and after a seeker service, one young mum write to her friends on her face book that she has been hugely challenged over this matter.

Although we need to be creative in our being (expression of) church, being 'entirely versatile' about the wrapper is going dangerously too far.

More and more
It is the Gospel (which includes both grace and Law -plus nothing that brings people to salvation!

Sorry, anonymous, but why is being totally versatile ABOUT THE WRAPPER going to far?

sorry - my comment should have been addressed to Neil Walpole not 'anonymous'!

When I wrote the above a few days ago I did so in a rush, hence an unfinished sentence as well as an ambiguous statement re the wrappers.

I guess the 'entirely versatile' should be unpacked a little more before I comment any further, but I stand firm in my resolve that those who are involved in 'other spiritualities' should be challenged head on, but gracefully of course.

Paul was much bolder than I could be in tackling this - in Acts chapter 13 Paul "filled with the Holy Spirit, looked straight at Elymas (the sorcerer)and said "you aare a child of the devil, an enemy of everything that is right ...."