It was thirty years ago today... 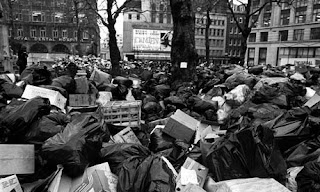 Mrs Thatcher taught the band to play. On this day in 1979 the Callaghan government lost a confidence motion in the house of commons (by 2 votes in over 600, I seem to remember) bringing to an end postwar concensus government — In Blairspeak, a pivotal point in British political history. The story may demonstrate the peril of delay in politics— it’s arguable that had 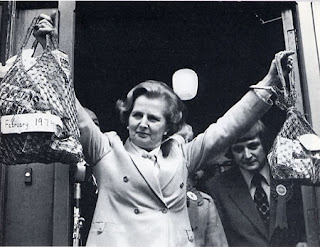 Sunny Jim gone to the country the autumn before the winter of discontent, he might well have squeaked home on a sympathy vote. Still being counterfactual, had General Gaultieri managed to keep his army in his trousers and off the Falklands, the fortunes of the first Thatcher administration, deeply unpopular in 1982, might have been different. Who can say? 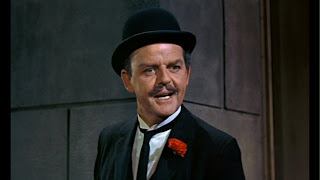 Thirty years on, the historical jury is out on what followed. One narrative says unions were tamed and the economy renewed as an enterprise engine, driven by financial wizards, unbridled by regulation. Another points out that social inequality soared, driven by a housing bubble and short-termism. Both narratives are right on their own buttons. Certainly banks ceased to be rather dowdy traditional “word is my bond” institutions, like the place Mary Poppins kept her umbrella.

Woody Allen once suggested all nature was a vast restaurant, everything eating everything. In that spirit Thatcherism released the genie that transformed all commerce into a vast betting shop. Recently, imagine if instead of bailing out banks from the top, government had helped people paying sub-prime mortgages from the other end. Could we have refloated the banks, through the micro-economy, bottom up? Of course not! That would be subsidizing fecklessness and irresponsibility. 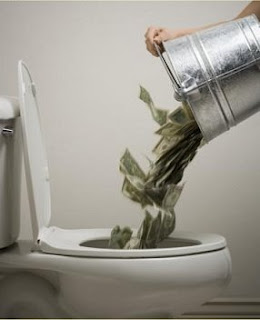 So instead we've squirted billions into the banks from the top down to avert commercial kismet, hoping they’d start doing lovely things with the lolly. I do wonder what Mrs Thatcher’s old dad, a paragon of thrift and hard work, would have made of Fred the Shred, flying in fruit every day from Paris, replacing carpets rather than cleaning them, and sacking staff over the colour of the biscuits, whilst studiously ignoring abundant evidence that he was steering his liner over financial Niagara Falls. Apparently that was not feckless or irresponsible. It was wealth creating. Really? 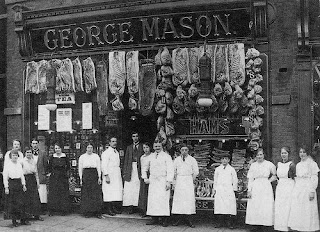 If RBS had been allowed to go bust...? Among other things, Fred’s pension would have to have been be paid by the guarantee scheme, capped at £27,000. And if he had thought that sum insufficient he could, at the age of 51, have gone out and got a job. I can imagine Alderman Roberts wondering what would be so terribly wrong with that...
Posted by Bishop Alan Wilson

It is strange how events work out.

It reminds me of the saying "What goes around, comes around".

Maggie Thatcher was incredibly popular within the Armed Forces when she took over. She restored confidence and provided resources which they had been starved off for years. I appreciate that other public services probably suffered as a result, but at the time, Russia was the perceived enemy, and we were ill prepared to defend ourselves if they had decided to come across the border.

Off course were were not aware of how derelict and neglected their systems were, or we might have been a little more secure in our beds.

Now, the world is a much more dangerous place, and becoming more so due to the current political impasse across all spheres.

Off course, mans freewill has much to do with it.

Our mission must be simple and clear with a message of God's word and love is sufficient, if accepted by all mankind, to provide for all of our spiritual needs - this will lead to material things becoming less important and perhaps we might than even be able to preserve our environment.