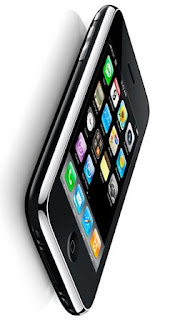 Day off Friday. Time for hobbies. Like many Brits since World War 2, I love Queueing. I had a fantastic time at India House last year, eclipsed by five hours on the M40 before Christmas. Among great queues of the world, I experienced an unforgettable two days in the New York blackout of August 2003. In the end water sellers working for the Triads and a guy called Ricky with a yacht got my teenage daughters and me out of Manhattan and safe across the Hudson. Do you know, we were almost disappointed when it ended! So when I heard the IPhone 3G was comng out, I was thrilled. The whole online O2 upgrade system fell over on Monday because of sheer volume — auguring super queueing when the O2 shops opened Friday morning at 8.02 (geddit?). But where? I picked Milton Keynes — two O2 shops in close proximity. If no queue for one, there should be a real corker for the other. 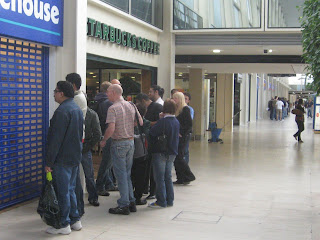 Thus I reported for duty at 07·45 on Friday, to find just over 120 people raring to go. Like Oxbrdge high table, queueing pleasure depends largely on whom you get next door. Real names witheld, but I struck lucky. “Steve” was tatooed with various swirling curly wurlies, all dressed for Celebrity Love Island, with those ankle length camouflage combat pants so popular among Japanese troops who think World War Two is still raging. “Nigel,” let's call him, was a non designer faded polo shirt 60 pound skinny weakling, such as you might hope to find under a pile of bullies on the beach. “Maz” is in financial services, with square designer frames. Maz snickered out of work, tee hee. Keeping us all in line were about half a dozen O2 goons in designer apple tee shirts designed to mock the punters’ folly with slogans like “It’s here.” 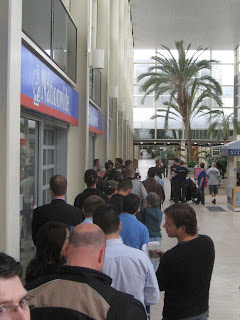 Now some groups ain't no place for a lady — The Cardinals for example (Rome not Saint Louis). “Tracey” was there with two naughty little muppets in a stroller, but she shows up in pretty much every queue in Britain so she don’t mean nothing by it. Apart from her and two slightly yuppie suits, the rest, folks, was male. “What if the press show up?” asks Steve. “Good thing I've already got a girlfriend.” Interesting discussion about girlfreinds, and what they all thought we were doing. After this opening burst of cameraderie, we got back to playing with our old iphones and not making eye contact, in the rather ho-hum way males don’t, whilst staring at urinals. Time passed by. 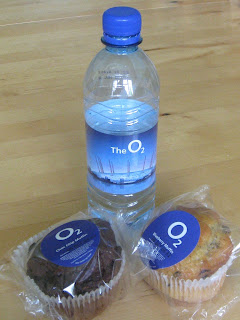 Muffin 1 — Chocolate Chip
15 minutes in
Cheerful o2 goons come round with muffins and bottled water (H2O — geddit?). Ominously, labels picture the millennium dome. The Triads charged $20 a bottle for water at LaGuardia in the NY blackout. Then the feds showed up and started giving it out. So are these goons Triads or Feds? No charge. It’s the feds, with the news they think they have enough stock for all of us. IPhones as well as Water. Deep Joy!

Muffin 2 — Blueberry (not Blackberry)
45 minutes in 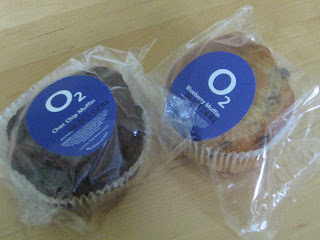 Funny, but this queue hasn’t moved for half an hour. Steve points out to me, and Maz agrees, that whilst 120 people started and about 20 of them seem to have gone in, none has come out. Scary, ja? Perhaps, I suggest, everybody is coming out as an o2 goon. Maz has been to Goa, initiating small talk about queues in India. None of us can bear to go to the front and check out what’s really happening, so we soldier on in faith. Russian soldiers at Borodino wondered if God was testing them. Stay or go? This is the summit of all queueing, the contest between anticipation and despair. One little guy’s carpark ticket runs out and he cracks. The three of us hang on in there, just.

Muffin 3 — Cherry
75 minutes in
Sturdy o2 goons come and fold the queue back on itself to stop a neighbouring boutique complaining. As we pass the shop front, a cheery o2 goon mocks the punters’ folly personally by flinging wide the glass door and crying “smell it!” Than comes the moment we have all been secretly dreading. An old lady potters over from Boots and asks the crucial, searing question — “what are you boys doing here?” O ground swallow me up! Steve deals with it for us, on condition we all agree to avoid future eye contact with old ladies until we’re safely in the shop. 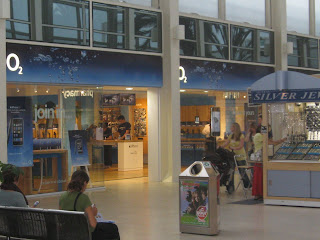 O2 goons turning nasty. One comes out to warn us they have run out of 16 meg Iphones. One or two faces drop. This is a moment of decision — does voracious geeky desire to finger the latest in any form outweigh geeky desire to have the biggest and the best? Actually I only wanted an 8. No really. It was the free upgrade package on 8’s got me here in the first place. Honestly. All surrounding geeks instantly agree with me, apart from Tracey and the muppets, who bottle out. Ha! another test, and we have passed!

Moreover, when the going gets tough the tough get going. Time for radical thnking. Nigel has a lightbulb moment. “Tell you what,” he says, “If we gaffer tape our old 2G 8gigs back to back to a new 3G 8gig, we'd have 16 gig anyway!” Great Thinking, Nigel. Thank you for sharing that. Maz takes Nigel aside gently to explain some of the drawbacks of his strategy. But we are impressed by the way the boy’s mind works.

Minus three muffins
100 minutes in
Joy! the front of the queue. Geeks all phone girlfriends, then remember girlfriends thought they were somewhere else. All geeks have some explaining to do, and this occupies the final three minutes of teetering Bridge-of-Doom anticipation.

09.35. Ushered to the Secret Place back of the store. Heart pounding, palms sweaty. Little black box in hand.This is it. 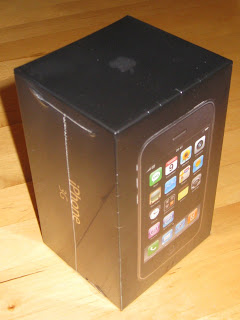 09.37. O2 upgrade system crashes. We’ll ring you when we can upgrade you. At any rate my old one still works. Actually it’s rather a good phone. Why did I ever want to upgrade it anyway? T. S. Eliot said the end of all our searching was to arrive where we had begun, but knowing what we were doing there. Sort of.
I think we’ve learned something today.
The end of all queuing, friends,
is Vanishing Point.
Posted by Bishop Alan Wilson

When I released my 'new' mobile amongst some friends there came the comment about 'bricks' - not to be daunted I reacted with - it's a downgrade from my free upgrade and the Credit that came with it!

Only to have my geek friend visit a take from the Terminator series when the original heroine character from the original film asks the chap behind the desk - If I hit the buttons and then press this - will I be able to talk to the guy at the other end? or something on those lines...

There's more to choosing a phone than the gadgets you'll, or rather I, will never use...

I hope you enjoyed the queue experience and the gadgets that most of us never use...