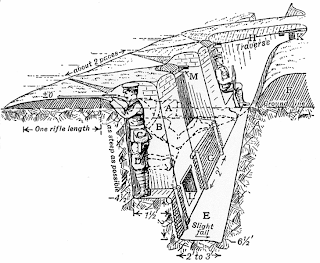 Confronted by the big problems of the real world, let alone the arcana of church politics, it is easy to reach sticking points where people simply dig in. In 1914 the fusion of spades, agricultural barbed wire and machine guns gave the world Trench warfare. The men who dug in thought it would all be over by Christmas, but they were wrong. Accidentally they had invented an all but unwinnable form of warfare. 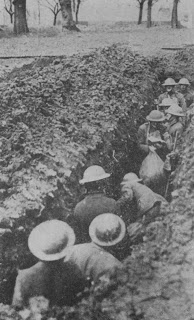 The sober fact for all sides to contemplate is that, to quote Saint Albert himself, You cannot solve a problem on the level it was created. For everyone except the few lunatics who actualy enjoy warfare (boy, this is what I call Vahalla!) the formulation of impossible opposites is an invitation, not to dig in, but to start up the little grey cells. It’s time for fresh thinking, not trench warfare! So the question of the day becomes, reversing a slogan of 1914, Do you know a man digging trenches, when he should be digging your garden?

Whether you’re running the Lambeth conference, pathfinding for the Anglican Communion, getting life expectancy in Zimbabwe higher than it was in England in the 11th century, or finding how to be radically inclusive in a fully traditional church, the only method is not Power Play, Militant Entryism and Dumb-Boy Thuggery, but FAITH! And here is the perfect illustration of this principle, courtesy of Scott Gunn:

Let's just hope and pray that through all that the Anglican Communion is facing at this time, there will be more fresh thinkers than trench diggers.

Tremendous illustration of faith in action at the end. I think that's going to be one that will stick in the mind!

oh boy oh boy... I want a box of Corn Starch for Christmas.... please have a word with Santa at Lambeth! Faith is cool and it's the backbone to my drawing antics.... I think God is cool!

I don't think you are saying anything here, Alan. In the simplest level, two groups have different views and they have to decide whether/how they live with each other.

Talking about 'faith' is pointless - everyone involved has faith, but puts their priorities in different places.

Ultimately the issue is about power - and whether Jesus anointed a special class of Christian to be holy enough to make these kinds of decisions on behalf of everyone else or said that there was a priesthood of all believers. If it is the latter, we have to seriously ask ourselves whether the heirarchical system of archbishops, bishops and clergy has anything to do with Christianity at all.

Amen to this Alan. It never ceases to surprise me that "Blessed are the peacemakers" is a phrase from scripture so frequently set aside by those wanting to dig trenches in a fight to preserve the purity of the Word. Keep up the inspirational work.

Thanks for all comment; Joe, two things strike me:

(1) faith means different things to diffferent people; as neutrally as I can put it, for some it's about preserving an idea by standing up for it consistently, whilst for others it's risking yourself for a creative endeavour.

(2) In a sociological sense, "hierarchy" seems to be an aspect of any human group. The question is how seriously the hierarchy takes itself, and whether it embraces responsibility and accountabiity by declaring itself, or doesn't, e.g. by pretending it doesn't exist. Some of the most authoritarian expressions of Christianity have thus been in traditions like the Brethren, with a radically flattened formal authority structure. The spiritual significance of the ordering of the Christian society is interpreted differently by different Christians, but I don't think any have ever suggested that ordination conferred a simple monopoly of holiness or power.

Alan - thanks for your comments.

Regarding (2), I am aware of highly authoritarian non-hierarchical church structures. The issue we have in the Anglican church is deftly put by Kierkegaarde, in that Christians appear to believe that it is the job of the 'professionals' to do the work and everyone else to watch. In the process, we break many with overwork.

I appreciate that certain Christians hold a particular role in our church, and that we happen to call them particular names. If we don't call them one thing, we call them another.

What bothers me is that a) there are so few workers who take on their role of a priesthood of all believers in their communities and b) a largely pointless topheavy system whereby big leaders at the top think they can tell everyone else what to believe and behave. Most of whom, in reality, have not been part of a regular Christian congregation for many years.

Joe, Thanks so much for putting your finger gently on what is perhaps the nub of the matter — not so much the structure in itself, but the mentality of those who enact it. I think the prob you are scoping is a real issue in a mass society like ours, whether it's authoritarian bishops/ archbishops or "Christian stars." Maybe we can't help being those things, but if the concept of being part of a priestly people means anything, it has to be expressed in the quality of our relatedness. Over directive disconnected leadership is bad news, all the worse in a Christian outfit which is called to model servant leadership. Egos and personal feifdoms actually compromise the whole enterprise at a fundamental values level, as well as suppressing good creative thinking.

Yes, maybe there is sadly a fundamental human need to have someone else as an authority figure (or spiritual superstar) to build up and then in time pull down.