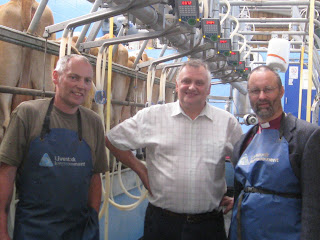 Glorous afternoon at Bolter End Farm, near Lane End. There are only four proper working farms left now between Stokenchurch and Marlow. The Lacey family have been farming here over 7 generations. There’s a fine herd of 120 Guernseys, some chickens and around 400 acres.
The situation of tenants, which the Laceys used to be, is often even more desperate. It’s hard work, but brothers Gideon and Daniel have stuck together and got on with it through thick and thin. 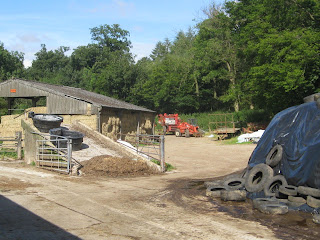 Interestingly, 18 months ago they took the incredible risk on bringing everything back home onto their farm. There are no food miles involved now. From bull to birth, from the field to the bottle, everything is done on the farm. This has involved significant borrowings, and the need to go out and market their own produce locally. 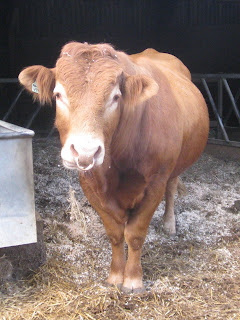 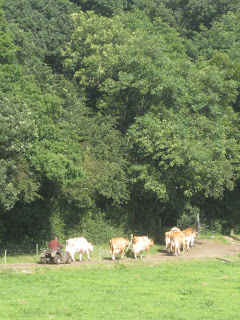 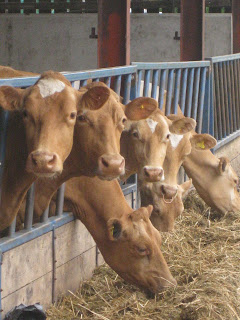 The scriptures picture farming as a picture of faith. Church people talk about faith as what you believe in your mind. But, as the man said, faith without works is dead. It’s is about life as much as religion; patience as much as politics. Here’s real faith, staking your whole family future on a vision for working the land, and a way of life that’s becoming more and more unsustainable in this country. 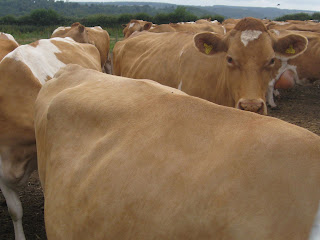 In France, is quelque different. There are far more small farmers, and the supermarkets and banks are less greedy. Any connerie and ten thousand small farmers drive up the champs elysées and deposit several tonnes of Merde on the Minister of Agriculture’s desk. In the UK, with the best will in the world, we don’t even have a proper minister of agriculture any more! The government’s rural policy feels to many farmers like “go out and get a proper job.” And they thought this was a proper job. 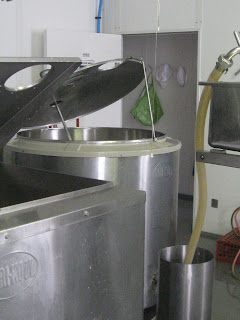 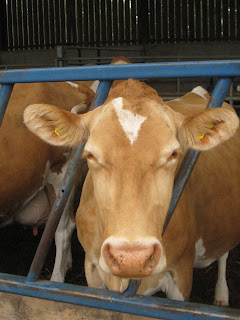 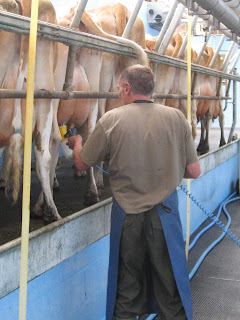 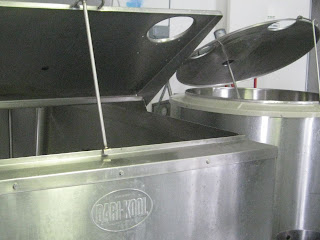 The grim fact is that UK supermarkets and banks have beggared thousands of English dairy farms into extinction over the past ten years. Like all world food prices ours are rising now, but fuel, energy and feed costs are soaring. There may be one or two corn barons in East Anglia, but, as with other media lost causes, beware stereotypes about farmers.

Let’s zoom in on the dirty truth about dairy. The Blue is the farm gate price. The Purple is the distributor/ processor element. The Cream, in every sense, is Lord Tesco’s Cut. In 1995, the farmer got about 24 pence a litre, the distributors got about 18, and Lord Tesco and chums got 1 and a bit. That may sound low, but of course he sold many litres compared to the farmer, so he wasn’t exactly short of a few bob. Can you believe it, but these days the farmer gets a bit less, and the distributor much the same, whilst 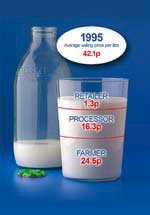 UK supermarkets are taking a huge cut — 10 times as much as back then! The argument for going local is to try and bring some of that margin back to the people who actually do the work. Otherwise some are actually being paid less than 10 years ago. Cut out supermarket Shareholders and for roughly the same price, the farmer gets a living wage. So why doesn’t everyone go local? Well it’s a hell of a risk, but the Laceys are going for it. They had no option when the costs of fuel and feed started soaring. It was that or bust. As consumers we have more options to go local than we might think — They’re doing it in Totnes, our diocese has been pushing the idea of going local, and all sorts of people are beginning to do it here in the Thames Valley. 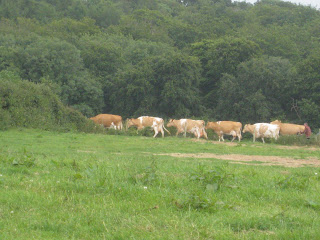 It was gratifying to be told that during the awful foot and mouth outbreaks of recent years, many farmers found it was the church that was there for them as a solid network and support. I know Linda Hillier did fantastic work in Slough during last year’s government induced foot and mouth cockup. Glyn Evans is deeply involved with Farm Crisis network and a host of other rural causes. Unless and until we turn the whole country into a theme park, farmers are the backbone who sustain the basic fabric of our rural communities as employers, councillors, and churchwardens. Here’s thanking them. 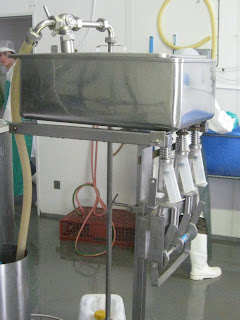 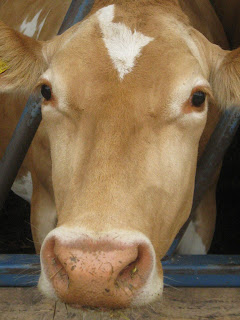 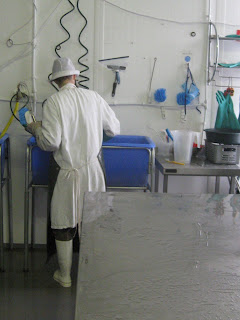 As Daniel and I put the world to rights, standing on the hillside, I realised nobody would do this for the money, but it’s a way of life that blesses all of us. Like the lady walking on corn starch, it’s real faith in action— not sabre rattling with your student union chums, but getting out there and taking risks in the real world; staking th 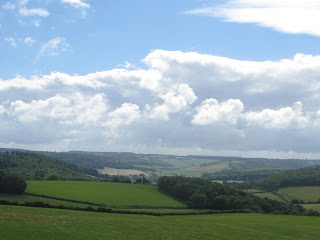 e farm, literally, on weather and land and hard work. Beautiful as they are, the chiltern hills are too chalky to be bountiful — it was the installation of piped water that transformed them for cow farming. That and hard graft. Throwing it all away for short-term bank and supermarket profits would be a crime and a waste.
Posted by Bishop Alan Wilson

'on ya, Bishop Alan. Australians seem to think that we have food security and the imports are on top of that - like lollies at Christma. But we are still in the longest drought in the memory of European settlement. Our biggest river system is in a pathetic mess with politicians casting around to do stuff but nothing, so far, has made a difference and revived and enlivened our precious waterways. Our Minister for Primary Industry thinks the 100 mile ethic an irrelevance. But then I think that indicates that the MPI must only speak to ag corporates and national farmers organisations. What I feel happening is people are increasingly interested in their food: where it comes from; what are the inputs; how far does it come; what is the true cost of getting it to us; and what are the ethics of food productions. I say a lot about this on my food blog, Oz Tucker at http://oztucker.blogspot.com. This might not have got to the Minister yet - but we do vote. Growing your own and buying local, in my view, are two of the most subversive things you can do in our modern society. And if you want to be even more radical then turn your attention to the ethics of animal involvement in our food chain. Anyway you have Stern and we in the Land of Oz have Garnaut (see links on my blog The Eagle's Nest at http://eaglesplace.blogspot.com). Our attention is about to become greatly focussed!

There seems to be something weird with the date on your post!

Having said that, I've recently blogged about a similar phenomenon in the fishing industry as well.

Hmm... yes, the piece was last July, Steve. Not sure when your feeder served it up!