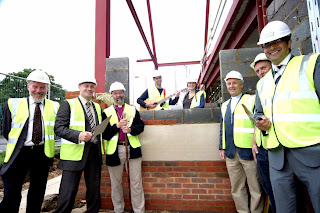 My first day back on Monday, I was able to spend some quality time on the Britwell estate in Slough, to help celebrate the new St George’s Church. Wikipedia (which doth not lie, some say) describes it as “a large overspill housing estate for bombed out Londoners [Citation needed]...depressing and overcowded [Citation needed].” Wikipedia also points out that the estate has sometimes been a rough old place — for a while buses wouldn't drive through it at night, and “Britwell's row of shops featured as a backdrop in the dystopia themed movie V for Vendetta.” 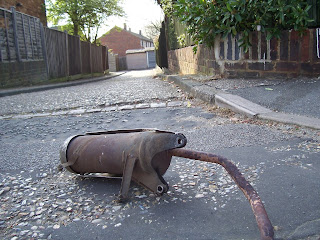 Back in the sixties a Church was built on the Britwell, but using what turned out to be the wrong kind of concrete with added asbestos! It had to come down in 2005. A brave but dwindling local congregation (almost single figures) refused to give up on the estate, but things lookd pretty hopeless. 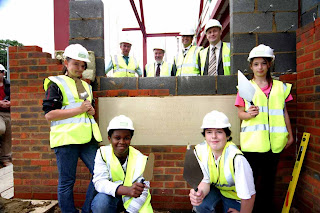 In 2004 John and Sue Chorlton came to Britwell, with a new vision. in 2006, Sarah Pix joined them.There wasn’t a building, so rebuilding the ruins had to start with the people network. Building round the faithful core, growing groups, engaging with people of all ages, the whole church is reinventing itself. A new congregation is growing steadily and organically. A great symbol and expression of all this is the new St George’s. 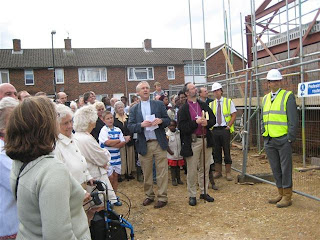 Britwell has turned into a fabulous renewal project — there are big challenges on the estate, of course, but there’s a courage, freshness and vitality about the place as well. Life Build Solutions have been wonderful partners in delivering a new vision for the whole community. I was reminded of the prophet’s words — “The glory of the latter house shall exceed the glory of the former house and, (punchline) in that place will I give peace, says the Lord.” 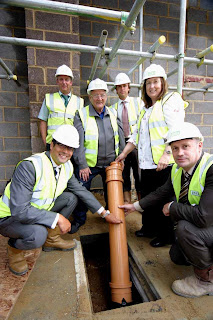 This building is already a great sign of hope. On Monday about 100 people, locals and outside collaborators, prayed and sang together as local people of various ages laid the stone, and a 100 year time capsule was buried under the floor. Thanks to David Brooks for pictures. Many people said they just hadn’t believed this new build could ever happen. Now it has its own YouTube channel.

Many on the estate would love to believe there is a God who loves them. Some of them have proved, in their own lives, that there is. But how does he love them? and how are they to access love as strong as death for themselves? That’s the big issue. But the kingdom is growing here, with increasing momentum, and the new St George’s is now a visible sign hope and the kingdom at the heart of this community.
Posted by Bishop Alan Wilson

This is SO inspiring!

I suppose the challenge for all churches is to find a true common project that allows every single person to make an equal and equally valid contribution.
Can that be done within our church structure, or do these examples only ever occur in times of complete new beginnings?

I hope and pray that this "congregation" will survive and flourish!