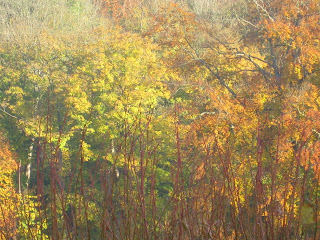 For much of last week, everything seemed to be on fire, with extraordinary light effects in the trees and all around the valley. Sometimes it all looked very much more dead, branches showing through, and no sunshine or blue sky to show off the autumn colours.

We have been talking in our diocese about “sustaining the sacred centre.” One wag at a recent diocesan synod suggested playfully that the sacred centre was Diocesan Church House! If I had to locate mine somewhere, it would probably be in the monastery. Not the place in itself, of course, but all it represents, with its vision of discipleship as an integrated way of life, founded on word and sacrament. 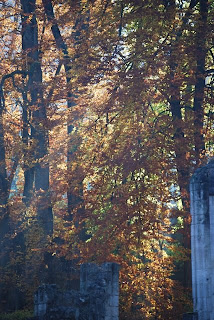 So what is real community? What principle to live by lies beyond private judgment? The old Tractarians pointed out that faith founded on private judgment can have no authority greater than that of the group members who exercise it. Faith which is simply private judgment writ large makes “Choice” itself a greater good than what is chosen can ever be. In healthcare, education, now even in finance, plenty of evidence is emerging that the great 20th Century God “Choice” is failing. A monastery amounts to more than the sum of the individuals who comprise it, because it offers a means of living beyond private judgment; thus monks promise obedience. It is the front end of a far greater community stretching back in time, and its faith is offered with a reckless generosity to the whole world as part of a greater community of monastics, walking in the way of Christ under the guidance of Saint Benedict, committed to Conversion, Stability and Obedience. 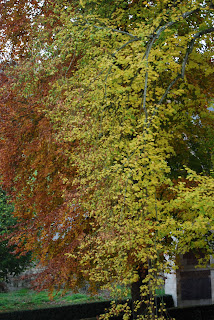 The special element that lifts this kind of community way beyond a merely subjective existence and gives it authority, is Stability. Brought up in a consumer society, accustomed to pick our own friends and churches according to taste, life in a monastic community poses us a truly radical question: what would you do if you couldn’t simply change the other people for more congenial alternatives, or even change the other people into being the kind of other people you wanted? Or what if you could, and it turned out that the kind of people you wanted them to be and they became was not what you actually wanted or needed, or what they needed to be to fulfill their God-given potential? Well then you would have to accept them, notionally, as they are, so that in fellowship with you they may become, and you might become, increasingly, what God would have you be, together. Commit yourself to them anyway, and see what happens; daring to believe that the faith you are called to exercise is more than private judgment, but is in some sense God’s gift to you and in you. The foundation of such a Christian community, where such transformation can happen, is, ironically, stability. It can only work where its members are prepared to commit on a foundational level to stability of life. This is the argument against church hopping, even if you are (in any particular instance) right and they are wrong. But next time round they may be right and you may be wrong; and if you rejected them last time, where are they now? The only thing for it is to proceed together, turning the Church from a convenience into a school of Christ, founded on stability.

Therefore when disputes arise in Church, one primary question, alongside the rights and wrongs of the actual bone of contention, is about the quality of commitment of the people concerned to the community itself as their primary calling. As our life unfolds, you have to listen to those who are most committed to the stability of the whole community, as well as the most innovative, those who make most noise or are most skilled in politics. And when the further we adventure in faith, like a bungee jumper, the more important it is to be securely attached.
The more anchored we are in stability, the more adventurously and creatively we can, in fact, live.
Posted by Bishop Alan Wilson

It is sad that intercessions hardly ever include prayers for our Monastery's and the men and women who live out every minute, the call to be holy. Their prayers for us, each and every day, give us all strength that we are not even aware of. Many pew warmers do not even know or understand what a Monastery is!

There's so much in the Christian Church we just take for granted, I find. For the first thirty years of my ife at least I just thought of religious as slightly odd individuals pursuing an individual calling, like on of those weird Monty Python life of Brian characters with a vow of silence or whatever. It seems so obvious now that the religious life is a gift to the whole church in itself — not an elitist thing at all, but a vital resource to all of us. This community just gets on with it, and it's a place of great blessing, almost by accident. I realise, of course, it's a lot of hard work too...