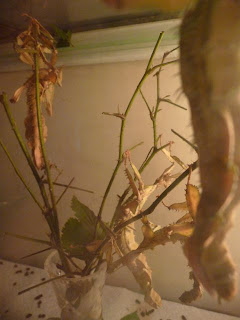 Ah! Bless! Parthenogenesis in our very own home on Christmas Eve. After a week or so of voracious bramble chomping in the tank, the complete stripping of all vegetation from their habitat, our first stick insect egg of this batch arrived last week, and now has six sisters.

Like other phasmids, MacLeay’s Spectres (Extatosoma Tiarata) reproduce in two ways —
So, it’s seven Girls! and we await some 700 little sisters for them from our five giant prickly virgins in their tank. This could challenge those with wonky thinking about paradise — Good news, here are your 700 virgins: Bad news, they’re all stick insects — Hallelujah!
Posted by Bishop Alan Wilson

I really like your stick insect posts. The close-up photos are really nice--you have a good eye for proportion. How did you get interested?