BNP MEP’s: bring on the clowns? 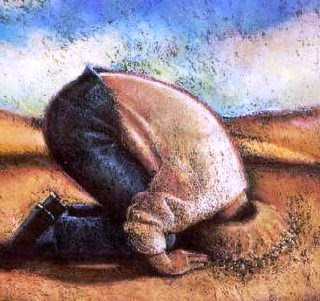 What about the BNP’s success in the Euro Elections? It’s a wakeup call for all “Hampstead Liberals” (pictured here on the BNP website). Christianity’s inherent Catholicity, an item in the Creed, flies in the face of the whole BNP deal. Their ideology contradicts a fundamental moral law — God hath made of one blood all nations upon earth. The Christian vision of heaven, all nations, kindreds and languages gathered together, is a good description of BNP hell — the last kind of place the BNP would want to wake up and find themselves. 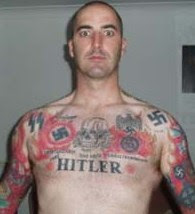 In these terms perhaps the European Parliament could be one of the next most hellish experiences a BNP Man, like this young BNP organiser pictured to the Right, can have, this side of the grave. Our new model BNP MEP’s may just order in a crate of Watney’s Red Barrel and sit it out, or the interactions could be educatonal. We shall see.

They have much to learn. Take a statement of Nick Griffin’s:

From Northern Ireland to Bosnia to Rwanda, sooner or later the majority of multiracial, multicultural societies fall apart in bloodshed. There may be a few, like Singapore, where with an extremely authoritarian state it works for a while, but the lesson of history is that it tends not to.

One longs to shout out the obvious reply: “Nick, there is a nation of 300 million, the largest economy in the world, a global superpower that attributes its success to immigrants building a multiracial multicultural society. E Pluribus Unum. They think it works for them, and they haven’t done badly on it.”

But there’d be little point. BNP fascism only works on a gut level. Will Cuppy observed years ago, “Aristotle was famous for knowing everything. He taught that the brain exists merely to cool the blood, and is not involved in the process of thinking. This is true only of certain persons.”

The excellent Channel 4/YouGov BNP Voting intentions analysis shows that, quoting Marx on Religion, BNP ideology is “the sighing of the oppressed creature” if not exactly the heart of a heartless world. People, mostly old style Labour voters, feel frustrated, disenfranchised, anxious and fearful. Fascist ideology, today as in the thirties, taps into anger and offers some kind of emotional release. 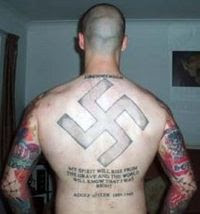 The disconnection of the Labour party from its own roots under Blair, Sun style pop Xenophobia, and disillusionment with parliamentarians, produced this result. Politicians must listen, not only pragmatically, but in a way that reconnects with this country’s historic Christian value base, or things can only get worse.

Finally, and this is cause for profound anxiety not complacency, we need to remember the BNP vote actually went down at this election. The BNP got in because Elections go on the proportion of votes cast. The Labour vote collapsed, and unprecedented numbers of voters stayed at home. The answer, as well perhaps as superficial solutions like Internet voting, is for our politicians to understand why, and address big issues about themselves, their values and their working practice. People look to their leaders to cast a vision, to enact compassion, to model Stability expressed in Christian values and so inspire trust and hope. If they’re not getting these things from the present lot, they will look elsewhere, even to clowns like the BNP.
.
Posted by Bishop Alan Wilson

I think you have laid bare the real factual mind set of the BNP.

I cannot understand how anyone can find anything in their policy to be comfortable with, unless of course, as you say, they are picking up those who politicians have ignored for the past 20 years or so.

I can speak from the comfort now of a middle class home, with a family. I do however come from the poorest area of East London, which when I was born and brought up, we had abject poverty (apart from 5 years in care).

All of my family now live outside that area, but I can remember the influence of what was then called the National Front, who were even than attracting members from the area.

Age 17 I joined the army and have been fortunate indeed to have left the environment. The Army gave me an education, which I lacked and a foot hold and a new perspective on a different kind of life from my childhood.

I wonder what and where I would be now, but for this.

UK Viewer
You say the army gave you an education.
Why didn't school?

We have huge social problems. All around me there are kids who think the world owes them a living, that they can behave as badly at school as they like because their parents will back them up when the teachers try to instil discipline.

My 13 year old is in a secondary school that is regularly in the Times top 250 schools and she says she personally knows 4 students she could get drugs from. My 15 year old has helped a friend out by buying her a pregnancy test kit - the second time she needed one.

A friend used to head up a maths department, took 3 years out to have a baby and has started to work occasionally as a Learning Support Assistant. In her supposedly good school (also in the Times top list), some of the 15year olds asked her contemptuously where they'd dragged her from, and one later said she didn't need GCSEs, she'd make a living by dealing drugs.

These kids have serious problems, some come from very fragmented families, others don't, and there's no way immigrants can be blamed for any of it! Nevertheless, some round here have blamed to jobbing Poles at the local yoghurt factory for all their ills.

It's not that politicians are ignoring the real issues, as much as that no-one really has a clue how to address them.

It appears, however, that one of the things urgently needed in the UK is voter education. One of the bloggers whose blog is listed in your sidebar seems to think that the HITLER in the tattoo actually spells T-R-O-T-S-K-Y.

If that kind of ignorance is widespread, it could mean that a lot of voters voted for the wrong party.

Can I ask one point of information:

"the BNP vote actually went down at this election."

Do you have a cite? I thought the actual numbers were 800k in 2004 and 950k now, although the numbers where Griffin and Brons were elected were down.