Devil Gets Knotted in Stone 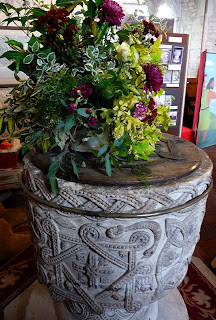 Whilst out leading the patronal festival at St John the Baptist, Stone, this morning, I couldn’t help noticing the font. Heavily restored as it has been, it is still one of the most remarkable pieces of Norman Carving I’ve ever seen.

As well as various characteristic rope patterns, it carries a strange picture of a man (Adam?), his son crushing the serpent’s head, and representations of the Holy Trinity with fish & dragons. 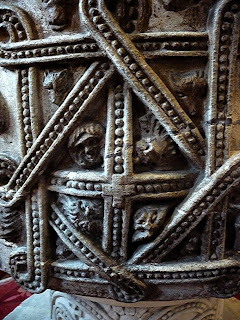 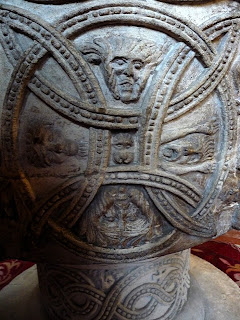 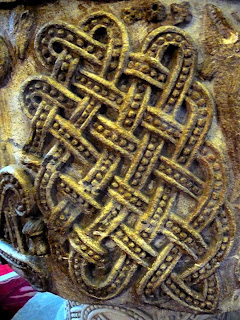 It came from Hampstead Norreys in Berkshire, and has only been in Stone since 1845. E. F. M. Watson described the design thus in 1906: 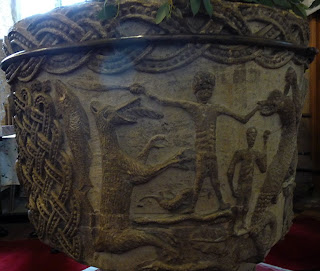 The Monster on the Left is the Evil One with open mouth and unknotted tail, free to destroy and hinder the free course of the Fish, that is the Christian Faith. On the right is the same Evil power, but a Hand is in its mouth and the tail is knotted; it is being subdued by the might of the Three Persons in the Holy Trinity, though it still holds in its claws a human head, whose expression is one of hopelessness and terror.

The Church guide is a bit more down to earth:

The font which is Norman is richly carved all around the bowl, with scenes thought to depict the conflict between Satan and the Trinity. A dragon representing Satan is baring his teeth and waving his tail. We then see him muzzled by the arm of the Father, pecked by the Spirit in the form of a Dove, and having had his tail knotted by the Son. 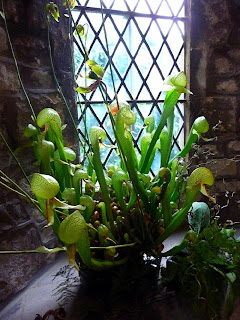 Reeling from this encounter with things fantastic, among other fine flower arrangements, I noticed a windowsill display containing Pitcher Plants — hardly your standard bunch of daffs, but they looked rather triffid-like and unusual. I imagine they also keep the flies down in the summer.
Posted by Bishop Alan Wilson

It calls to mind the phrase from the blessing of the water at baptism:

"All creation magnifies thee, who hast revealed thyself. For thou, O our God, has revealed thyself upon earth, and has dwelt among men. Thou didst hallow the streams of Jordan, sending down upon them from heaven thy Holy Spirit, and didst crush the heads of the dragons who lurked there."

Nice font. Unfortunately your interpretation is too Christian. The design is essentially Viking. In the Eddas Tyr binds the wolf Fenrir, and loses his arm in the process (hence the knotted tail and bitten hand). Eventually this wolf will come loose at the end of the world (Ragnarok), and a new dynasty of gods is to rule. Furthermore, Odin ("Woden") casts the Midgard ("middle earth") worm (serpent) to the world's perimeter, and is therefore its master -hence the figure standing on the "worm" could be symbolising domination over the serpent.
Could you provide more details about the font, like the name of the church and the county? That would be great, Demetrios (atheist).

Demetrois, Many thansk for a fascinating bit of folklore. Font is at Stone in Buckinghamshire (as per the article). There were Danish settlements in the area in the 10th Century, if that helps.

The use of this objevt as a Christain font since that time is significant... it becomes a rather fascinating example of the way the contect was taken over by Christians rather than obliterated, perhaps...

I was most rewarding to find the entry for the font at Stone, one of the most intriguing and fascinating of the English Norman period. If I may, I would like to point a few interesting details that we have learned in the study of the font.

It is not originally from Stone; its origin in Hampstead Norreys, Berks., is well documented; it is believed it arrived in Stone in the 18thC, after being in private hands for a time. The base is 18thC. There are reasons to believe that parts of the iconographic programme are the result of a re-carving.

With regards the programme itself the explanation by Demetrios is very interesting and would explain some of the elements on it. We must not forget, however, that it is a Christian vessel made for the purpose of baptism, therefore all interpretation of its programme must take into account this fact. The presence of crosses in the interlacing is but an indication to that effect.

I am very grateful to Bishop Alan for highlighting this magnificent font. Would you permit us to reproduce some of your images in our catalogue-inventory of ancient baptismal fonts, BSI?

A number of reference sources are available in our biobliography, and I would gladly provide them to anyone asking me directly, rather than extend this already wordy message.

Kind regards to all,