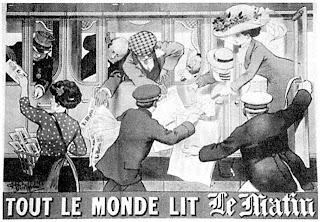 What’s propaganda and what’s news? One of the great texts to map the question is Arthur Ponsonby’s Fasehood in War-Time (1928) (h/t Jolyon Mitchell). The subtitle says it all — “an amazing collection of carefully documented lies circulated in Great Britain, France, Germany, Italy and America during the Great War.” Wartime requires lies, but when peace breaks out people should wise up to what has been done to them. 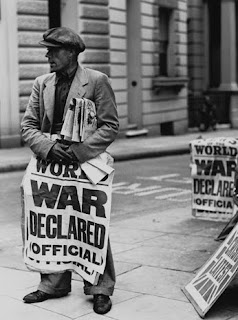 It’s a treasure trove of fantasies and deceptions, great and small — Russian troops marching through Crewe with snow on their boots, babies with their hands cut off, mutilated nurses and branded nuns, corpse factories, enamelled adverts with secret spy info hidden on the back.
One enterprising Austrian firm supplied atrocity photographs to both sides, ready for captioning as required. 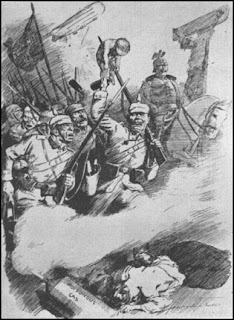 In among the small fry swim mighty Koi — great Lies of State. As late as 1913, Hansard records fervent, lofty denials of any understanding with France that could lead to a British Expeditionary Force being sent to war on the continent. As well as lies of commission came lies of ommission. The violation of the “scrap of paper” that resulted in the invasion of Belgian was true, but less heinous when one remembers the French had laid eerily similar plans to do the same thing if necessary. All nations were on the game, fuelled by fear and hysteria:

As Wartime rationing induced permanent change in the food industry, wartime distortion and manipulation transformed the media game. One product of the Great War was Lord Northcliffe’s propaganda department at Crewe House, which made “you provide the pictures, I’ll provide the war” methods of what had been called the yellow press acceptable in the mainstream media of the day. In the more direct media landscape we now inhabit (some call it “disintermediated”) Chinese Whispers are higher power, but also far easier to check and challenge from the source. We need to get our heads around the diference between being media consumers and participants...
Posted by Bishop Alan Wilson

It's always nice when you can not only be informed, but also get knowledge, from these type of blog, nice entry. Thanks

I never thought of it like that, but it really is true.