Only the men up front get to dress up... 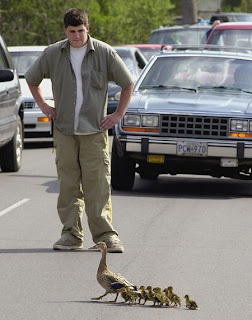 I enjoyed doing a short introduction for an All-Age worship training day at Worminghall put together by David Kaboleh, the Vicar. Main sessions were led by Nick Harding — Children’s Ministry Officer in the Diocese of Southwell and Nottingham, a wonderful and inspiring trainer who somehow managed to draw a mainly adult audience into various all ages experiences to illustrate his various points. Nick also led a session on a very interesting question about which he’s written a booklet, Boys, God and the Church (can be downloaded here)

One highlight of the day for me, however, was the following notional letter to Grandma Nick shared with us, written back in the nineties by Judith Wigley, from the Bradford diocese, guesstimating how a Sunday Church Service might be described by a child from a toddler group:

This morning Mummy took me to Church for the very first time. I thought we were going to Rainbow Toddlers because we went through the big giant’s door, but we weren’t because the room was different and much bigger. It was cold, with nothing on the floor, and we didn’t take our coats off all the time we were there.

There was a man at the door who didn’t know Mummy but he sort of smiled at her. She got a book and piece of paper. I don’t think he saw me because I didn’t get anything. Only the grown ups did.

Auntie Joan was there from toddlers and my special friend Lucy. Lucy wasn’t allowed to sit by me because she was with her Daddy and big sister. Our Daddy didn’t want to come. I stood up on the seat to wave to Lucy but her Daddy told her to sit down and be good. I only wanted to wave. The lady behind us asked Mummy to take me off the seat because I was making it dirty so she carried me. I wanted to see the man who was talking.

Soon we started to play games. First it was dressing up, but only the Men at the Front were allowed to play. It wasn’t fair really because I wanted to put on a big dress like them. We all played hide and seek though, Grandma, even the grown ups. You get down and hide behind the seat, and when the man says the magic word “Amen” you jump up again. They played that three times!

Singing time was good fun, but I didn’t know all of the songs. They sang some that we sing in Rainbow Toddlers, clapping and dancing songs. There was a big space for dancing and jumping right between the seats but nobody used it. It was hard to dance in Mummy’s arms but I made a big noise clapping. Lucy did too but her Daddy told her to be quiet. Grandma, can you clap quietly? The grown-ups were very good at it in Church.

You have to pay to go Church, Grandma. Two men came round with big big plates and collected all your money. Some people didn’t have any money so they gave them an envelope instead. But you know something, Grandma, you didn’t get any drinks and biscuits even though you’d paid. They just gave it all to the Man at the Front. I think he must be very rich.

Later the Man at the Front said that all the children had to go out. I think he was fed up with us. Mummy took me to the room where we have Rainbow Toddlers but it wasn’t the same. Mummy wanted to go back into Church to listen to the man talk about Jesus. Poor mummy — I’m sure it would be nicer for her to read my book about him. I played with Lucy for a while but then I wanted Mummy to come back. The lady said that she wouldn’t be long, but she was. I cried because I missed my mummy but Lucy kissed me better.

At the end, the dressed up man was standing by the door. He asked Mummy if she had been before and said he hoped that she would come again. He shook Mummy’s hand. He didn’t speak to me. I don’t think he wants me to come again. Perhaps it’s because I can’t clap quietly or because I wanted to wave to Lucy. I didn’t mean to dirty their seat, Grandma — I only wanted to see.

I slept all afternoon when we got home. Daddy said I can go every week if it makes me sleepy, but Grandma, I’m not sure I want to go again.

Spot on, I'd say. And don't forget the annoyed sidesperson clenching his fists in impatience by his sides at Granny because she was slow to get into the pew and he wanted to get past to help other people up the narrow side aisle.

Yes, people want a spiritual space in which to pray and experience the Lord, but there has to be some basic awareness that children were, um, welcomed by Christ, and a goodly number of adults are empowered to come to church more or less when they want to.

Hmmm. Forgot the offensive ageism, I'm afraid, but I've experienced that, too. The whole church thing gets quite difficult in misanthropic mode...

And the funny thing is our Vicar's children always seemed to have a teflon factor. They could be much more bouncy than other peoples' kids but people were artificially nice about it. Funny old world.

Funny old world but we love it, just the same. And if we do, how much more so, God?

Cool story as for me. It would be great to read something more about this topic. Thanks for sharing this data.
Sexy Lady
Escort service