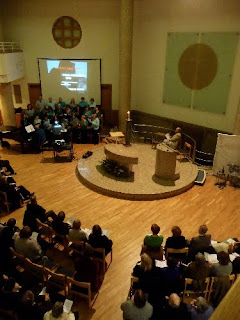 A great honour to say a few words with others at this year’s MK City Holocaust Memorial Day celebration at Christ the Cornerstone. We were opening an exhibition of art principally by two artists, Edna Eguchi Read and Alicia Melamed Adams.

Edna’s work explored the legacy of war, including Afghanistan, as someone of partly Japanese ancestry. She encodes the legacy of Hiroshima and Nagasaki not as anger, but an errily ash-covered general and domestic world of stuff. Ordinary things are reduced to a kind of useless sterility, where all that is left is form, bereft of function. She does something similar in this exhibition with passport-sized images of troops killed in Afghanistan, flattened as a collage onto a wall. D 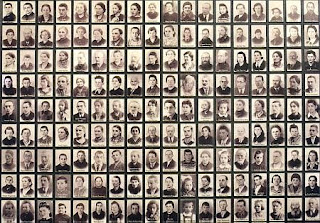 rat! I didn’t take a picture... you’ll just have to go and catch the exhibition if you can. I had seen the same thing on Sunday at the Cape Town Holocaust Centre — a collage of ordinary people’s photographs greets you as you enter the historical displays area. 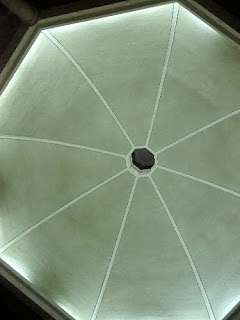 During the evening Arran Hartley and Georgia Bateman, presented a moving a/v collage reflecting on their school visit to Auschwitz. It took a fresh, powerful view. They had been especially shocked and moved by the piles of stuff, shoes, hair, artifical limbs. Alicia’s work as an artist who survived the holocaust puts faces to the story. This is very important because we are about the last generation to have the privilege of talking with and learning from holocaust survivors. All our grandhildren will have are the faces in art, or the Holocaust may be reduced to a mere topic in history, not an exposure of our own tragic capacity for evil.

Alicia’s work is fundamentally a statement of hope in the face of the unspeakable. She pulls no punches. Consider this picture, The Parting, and commentary:

My parents and I and a few relatives who had survived worked for a German, Victor Kremin, who set us up in a small camp where we collected iron and rags. On 24th July 1943 we were surrounded by Gestapo and taken to the local prison. It was their custom to keep people for three days without food until they were weak and then to load them onto lorries and shoot them outside Drohobycz in Bronica Woods. When we were brought into the prison I saw Poldek Weiss who was 17. We had met twice before in a friend’s house. His father was a tailor for the Gestapo. 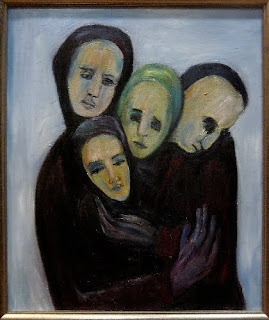 His father made a suit for the head of the Gestapo and the son was released from prison. He begged his father to intervene on my behalf. I was 14 at the time. His father made another suit and I was let out on the third day as Poldek’s wife. My whole family were shot the next day. This picture is called The Parting. It shows me parting from my family in prison.

Ultimately, though, what makes Alicia’s work so extraordinary is her capacity for hope and joy that was not entirely rubbed out. Her final painting was entitled Going up soon, but where? in which, Julia Weiner says: 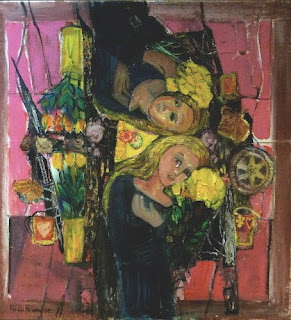 the artist thinks about her own death. After the horrors of her childhood, death appears to offer little horror to Alicia, and this light-filled work with its radiant pink backround contrasts to the earlier works about death. There, she used dark colours and menacing shapes to evoke death by violence and at the hands of others. When death comes naturally it’s not to be feared.

In tears, but usefully so.