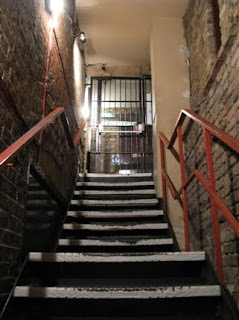 Feeding the soul is not just for Lent. The highlight of this post-Easter break has been a visit with an old friend and Stephanie to the 606, one of my loved and inceasingly loved sources of soul food.

You can’t just wander in off the street. There’s an entryphone, grille and long staircase to negotiate, a fact that in itself makes the whole place seem deliciously contraband, like a speak easy. 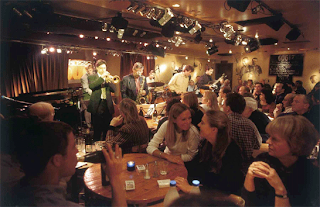 Inside you find a small basement and bar, some tropical fish and a kitchen. I once asked one of the staff when it closed and was told “how would I know that? I’ve only been working here four years.” The 606 is the ultimate musician’s jazz club. — evenings up close with some of the finest musicians in the world, even on a Wednesday night. 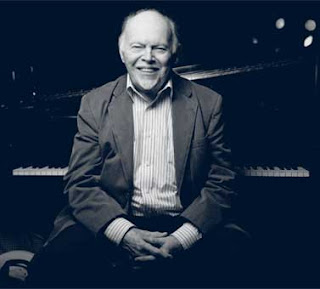 This is not ego food, but soul food — graceful, passionate stuff. This Wedenesday saw two trios — John Critchinson (Ronnie Scott’s old pianist, looking increasingly like David Attenborough in Jurassic Park), Alec Dankworth (who has played with Dave Brubeck, giving a mellow impression that the double bass was playing him not the other way round, and laying down a powerful, gentle, playful beat), and Dave Cliff, a straight ahead guitarist who somehow eliminated all traces of pickiness or twiddle and fitted everything together like an old glove. Sound was subtle, creamy goodness. We had no idea of the time. The stuff you eat at the 606 is getting good, too. 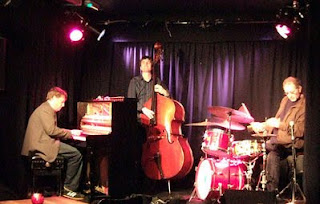 Second set was something completely different, Bryan Spring the drummer, who played Stan Tracey’s second take of Under Milk Wood, with Andy Cleyndert (unusual to see a bow occasionally used in such a context) and Mark Edwards who managed to hold his own against some (occasionall) ferocious intense drumming, all the time placing notes with Wolfgang Amadeus precision. 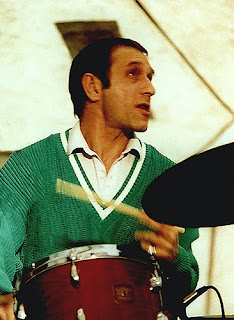 Bryan Spring coaxed a glistening web of surround sound out of four cymbals, and did strange and beautiful things with a snare. His solos are passionate and gloriously precarious — like seeing someone skipping along the edge of a cliff, dancing off the edge, a cartoon character who hangs in the air for what seems like minutes, then bounces triumphantly back onto the edge, absolutely on cue. The whole evening was a startling fusion of musical passion, grace and mutual humility, and almost a give away.

Jazz is the the closest metaphor to the Trinity and our relationship to God that I know.

Not sure if it's still going but a while back the 606 were hosting a Sunday 1-4pm session known as Gospel Tunch - because it spanned lunchtime and teatime. The guy behind this was/is a seriously talented man called Miko Giedroyc - he's a reformed investment banker who plays a mean Hammond. Go if it's still happening - but book early, it's pretty popular.

Oh my! 606 sounds lovely. From your title, I couldn't decide if your post was about food or about spiritual food. Wrong in both instances, except that jazz IS spiritual food.

Bishop Alan, if you tire of being a bishop, I see work as jazz critic in your future.

Hadn't heard this one, but I'm sure to remember it! Great work here!