How the Swiss conquered the world... 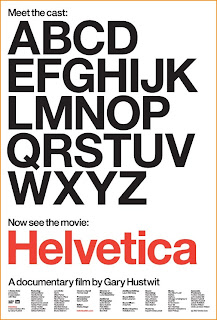 ...without anyone noticing. Design education for all! Had it come from Bristol not Basel it would have been called Helvetical, indeed it probably has been, but since 1957 Helvetica has become the Lingua Franca of print. And now it has its own Movie.

Helvetica is the finest design education documentary I have seen. It tells the tale of how the West was won — by Max Miedinger and Eduard Hoffmann at the Haas’ Schriftgiesserei in the Swiss village of Münchenstein (Basel). 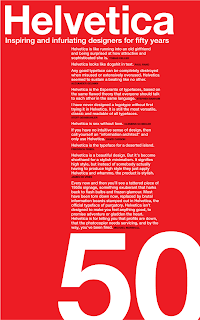 The boys were trying to produce a clean modern interpretation of Akzidenz Grotesk, a classic Victorian Sanserif, for the Swiss market. Three years of development produced Neue Haas Grotesk, at around the time clean design was all the rage. Reflecting on the success of Univers, Artur Ritzel of Stempel picked up NHG, reworked and renamed it, cleaning up its characteristic horizontal endings. Enter Monotype and variants in variants in Arabic, Cyrillic, Greek, Hebrew, and Vietnamese and hey presto! the boys soon conquered the world, in a characteristically understated Swiss way, without anyone noticing.
This wonderful film, which is nothing like as boring as I probably make it sound, shows how Helvetica fills the earth, from the NY subway to sports shirts, TV titles, Brass plates, prostitutes’ calling cards, Church bulletins, commercial logos, road signs...

It is the glory, and perhaps, curse, of type to be almost entirely implicit. Little things make all the difference. It works by not drawing attention to itself.

This film stars the John, Paul, George and Ringo of type design (Massimo Vignelli, Matthew Carter, Erik Spiekermann, and Wim Crouwell — and where’s Lars Müller? you ask). My eyes were opened to such things by Spiekermann’s fabulous book Stop Stealing Sheep, and hairs rose on the back of my neck as the Great Man, resplendent in bottle-thick glasses, held forth in a thick Teutonic accent:

Other people look at bottles of wine or girls’ bottoms. I look at type. It’s a very nerdish thing to do, but I am very much a work person, I think.

Go Erik! Modernism. That‘s the rub. Helvetica is characteristic of Modernism — clean, open, minimalistic. If you don’t like Modernism, you probably don’t like Helvetica. This film is not entirely reverential. However one look back at the tawdry, fudged up design of a fiftes Magazine was enough to convince me that 50 years of Helvetica is worth celebrating. If only it was as easy to clean up every other aspect of the New York Subway system!

Do you read the SwissMiss design blog? Worth following.

If only they did the story of Gill Sans and Perpetua it would be a High Wycombe film - Helvetica meets Cemetery Junction!

Good to hear you preach on Thursday. No-one looked sheepish afterwards that's for sure!

I guess it is ok for those who like that sort of thing, but I have never liked sanserif types. They have always struck me as if they were made for those barely able to read.

Modernism, to put it bluntly, is over rated.