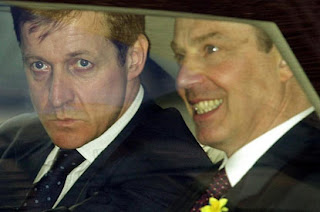 I have some trepidation about the cult of leadership, because the effectiveness of any outfit really does depend on the systemics and context as much as a single leader's gifts and commitment. However, continuing the discussion begun here yesterday, my eye was taken last week by some principles about leadership from an unlikely source — Alastair Campbell, Tony Blair’s great Spin Doctor in the Sky, whose diaries are now appearing in print. 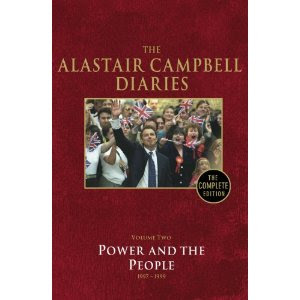 These may well become the prime source for political historians of the Blair years in the way Alan Clark’s did for Thatcher. Some will like Mr Campbell more than others, indeed his partner says he’s been much nicer to live with since he finished work as a spin doctor, but he’s a perceptive information hound who observed world and goverment leaders closely for ten years. He pulls no punches. In a Times interview he concludes these are the qualities that make an effective leader in this day and age:
Discuss?
Posted by Bishop Alan Wilson

First impression is that he arrived at those conclusions after observing his boss do the opposite behaviours during his term at 10 Downing Street.

OS, I'm inclined to agree! It's good to have a boss who lets you learn from their mistakes!

Seriously, I'm afraid the Iraq War turned the whole Blair machine to ashes in my mouth, as it did for others. Watching the contrast between "Yes, Minister" in the eighties and "The Thick of it" five years ago was funny but painfully so. AC is no hero of mine, though he seems to have mellowed in a good way a bit.

I was fascinated by the interview with him, though, and struck by his comments, founded I would imagine on observing a basket of world & national leaders at work.

Helpful, thanks. I have more time for Blair than most and think that Campbell talks a lot of sense.

The one thing I would take issue with is your opening remark:
'the effectiveness of any outfit really does depend on the systemics and context as much as a single leader's gifts and commitment.'
I wonder how true this is. My experience of governance in a wide range of schools in very different contexts is that the head teacher is key. A good head in challenging circumstances can quite quickly begin to turn things round. A weak head, even with the best support and a favourable headwind, can mess things up in no time. Appointing the right head is the single most important decision a governing body can make, whatever the circumstances and systems in place.

I have a sense that the same is true in ministry. I have seen situations where everyone, including bishop and archdeacon, has written off an area as a lost cause. Clergy have been appointed with the promise that they will be given another post after a few years ('do your five years and then we will get you out of there'). Yet, some gifted and faithful clergy have committed themselves to these parishes, taken a long term approach and made a real difference in the church and wider community in the area.

I'm more and more convinced that leadership matters more than systems and context. Of course I could be wrong...

Thanks, Phil for the thought. Reflecting on my own school experience you're certainly right, but authorities that rely on the inspirational head to turn the school around without giving them straw to make bricks, or having any concept of school improvement across the board certainly stack the odds against themselves, both for recruiting good heads and retaining them. Perhaps it was a mistake for me to seemingly back up the individual against the system. I think I was probably motivated to do so by rather depressing experiences of the dependency culture you can get in both churches and schools where people simply pin everything on getting a new super-dreadnought head/vicar when there are things they could address closer to home that would be transformational. Pragmatically, though, I think your point is very well made. Thanks for it.

with 'your thoughts not important' experience of church (priest & pcc) and nhs leadership the epicentre needs to be 'communication' ...'I am right listen / shut up / put up' attitudes never work - theres no 'I' in 'team'....but 'ME' can be found in 'team' - if the 'what about 'me' & my thoughts / ideas' can at least be listened to & each individual feel appreciated the leader will have support even when their ways are not necessarily the ways of the majority. Having been a churchwarden for a so called 'strong minded / super' priest I wandered off into a spiritual wilderness untill discovering a neighbouring parish where there is a 'strong' lead who encourages openess & respect rather than elite cliques

Thanks, Carol. Your words remind me that it';s easy to think of equality as some abstract or political virtue when in fact working equality is the only basis on which good shared work can flourish. So glad you found somewhere this was understood on the ground...