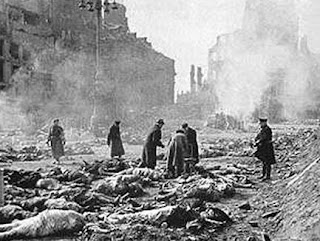 ...is very interesting for anyone who grew up with the Simplicissimus (“We were right so everything we did was right.”) English black & white movie narrative of World War 2. But that's another story, best told, perhaps, in resurgent stone Baroque which contrasts strangely with Socialist Realist 1960’s blocks that doughnut the centre. 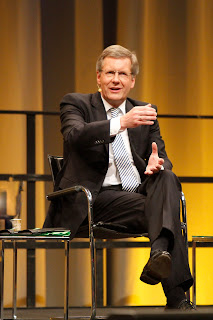 For the first (and probably last) time in my life, I looked along the row yesterday morning at a Bible Study, to find Dr Christian Wulff (CDU), President of the Bundesrepublik.
So, no name dropping you understand, there was I a few feet along from the head of state of the largest democracy in Europe... 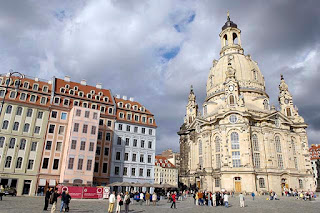 So, it’s OK for politicians to do God in this country, including by a Roman Catholic politician who turns up at a Protestant Bible Study as participant. I wasn’t too wowed by all the childish nonsense in the UK press about Tony Blair and what denomination he could join.
But a further bit of doing God happened slightly later when the President was up on the stage with young people and educators concerned with integration and civil society. As a warm up, the interviewer asked everybody a personal question — “do you pray and, if so, to which God?”

The Christian Wulff answer, for what it’s worth, was that when he is on the road he enjoys some time out in Churches and similar places, and personally, he prays every night as part of his bedtime routine. He prays to “Jesus as described in the Bible.”
But what was interesting was what happened next, or rather what didn’t. Nobody suggested he was a nutter. Nobody suggested his new Economic wheezes were the product of either God or the Devil, being foisted on the public within a secret theocratic agenda. Nobody suggested that he was merely making it up to gain votes.
Indeed, Chicken Licken, the sky did not fall. And that was the difference between the way such a question is handled in the public square our side of the channel and pretty much everywhere else. Where grown-ups live.
Posted by Bishop Alan Wilson

This is a smart and perceptive post, Alan. The polarisation around public faith-commitment in the UK is increasingly heated and lightless - "we're all being persecuted" vs. "We're a secular state so Christians like us should just shut up". Hopefully we can learn that lesson too (among others perhaps) from Dresden.

Many thanks for this. I was just talking to a colleague this morning about the difficulty of imagining the Kirchentag happening on the streets of Manchester or Birmingham. How have we got ourselves, as a society, to the point where such creative, intelligent and public engagement with Christian faith seems improbable? I wonder if we in the church have to bear some of the responsibility for that.

I'm really sorry not to have been at Kirchentag since my one and only last visit. I keep meaning to go, but it usually runs up against Ascension or Whitsun and the canons suggest i ought not to desert the parish for such.