It’s always fascinating but unsettling to see living people walking around on the big screen — Stephen Frears’ masterful portrait of The Queen springs to mind.

It’s disturbing to think that the person concerned, along with their nearest and dearest, must be watching this.

I gather the Thatcher clan sat this one out, wisely I think, but they may have sneaked a few peeks through the cracks between their fingers.

This is non-political non-historical Thatcher; indeed all that is missing is music by Signor Puccini to accompany the verismo libretto of “Signora Thatcher e Denis”. The curtain rises to discover our heroine in a Pooter-Chic apartment full of pictures of herself, the sort ordinary people would have to had to Photoshop, mulling over her glory years. Age has wearied her, and the years condemn. June, a maid, hovers cheerfully in the background, whilst her slightly dog-eared daughter Carol performs the functions of a faintly exasperated maid. Meanwhile, 6,000 miles away, the adored Boy Mark drifts on, heedless. 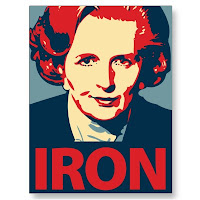 The other principal in the tale, is the shade of Denis, who is not entirely buffo. He flits in and out between arias with kindly but piquant saloon-bar comment.

There goes the Falklands war, and in a furioso aria, La Thatcher tongue-lashes an Argentine dictator, a US Secretary of State, and her own lily-livered crew.

As the aria fades, Denis slides gently onto the sofa behind MT and says something like “well, that saved your bacon, didn’t it old girl.”

You get the idea.

At heart la Thatcher is an ordinary human being with a penchant for occasional Churchillian verbal spasms. Early on she stages an epic breakout, and gets as far as the paper shop where she discovers, horrore! milk is now 49p a pint. This treatment is kindly to the point of patronising, a kindness for those of us still traumatised by her Spitting Image. It’s free with the facts but that could be its greatest strength. 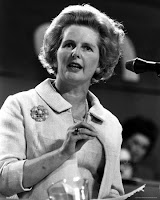 What about Thatcherism, though?

Well what about it? Nothing to it, really. That could be why, in real life, her foundation went bust a few years ago.

Mrs Thatcher’s lifetime achievement turns out to have been holding on tight to the memory of a much-admired father, and living up to his instincts and slogans courageously through an escalating variety of challenges — a thoroughly decent thing to do, but hardly the basis for a new kind of world government.


contemporary history can only justify its claim to be a serious intellectual discipline and more than a desultory and superficial review of the contemporary scene, if it sets out to clarify the basic structural changes which have shaped the modern world. These changes are fundamental because they fix the skeleton or framework within which political action takes place.

This film is no work of contemporary history. It does not clarify the structural changes that have shaped the modern world. As  various chickens come home to roost, sending the wheels flying off the whole neo-liberal free market panjandrum Mrs Thatcher and her friends honestly believed in and represented, perhaps the same can be said of “Thatcherism” itself. But that’s a judgement for historians a few years hence. For now, just enjoy the show.

Meryl Streep's performance is as amazing as everybody says, and if your taste runs to opera verismo in a Barret Home, Signora Thatcher e Denis could well be the production of a lifetime.
Posted by Bishop Alan Wilson

"What about Thatcherism, though?

Well what about it? Nothing to it, really."

Perhaps this is because, like a fish that's never heard of water, we're immersed in it. Vicious individualism. Hatred of the poor, of anything that doesn't make a profit. A population unable to think, which makes every government happy.

I'm fascinated by Deference Tories, people from backgrounds that Tories with power depend on but despise - people who swallow racist, sexist, homophobic, classist rhetoric at the same time as being non-white, women, gay or poor - and wonder if Thatcher was one. Humble background, yearning to excel she could look up to her betters and emulate them. And when she became vulnerable they betrayed her, as every good Thatcherite should.

The difference between her and the other people of her age that she betrayed is that she's experiencing dementia in luxury rather than in a prison care facility or being dead.

The more time goes by, the more insubstantial "Thatcherism" turns out to have been — at best smoke and mirrors to make locust years appear to the age of plenty, largely through the promotion of funny money and inequality. I think however her economic mistake was to be too singleminded about pursuing "growth" measured solely by GDP, whilst human societies fell apart around her. Thus inflation was the great horror (and excessive inflation is not a pretty thing), whilst unemployment didn't matter to her. Many other people agreed at the time, though. The net effect was to prevent English society making the adjustments it needed to make, whilst it became more outwardly complacent and inwardly divided. I still wonder where she would have been without the Falklands war. Could she have reinvented herself in such a way as to leave a legacy of lasting value?

I don't think that she didn't care but her Achilles heel was that she did not understand psychology and genuinely believed that a strong economy would make everything right.
She genuinely believed in the trickle down effect and she wasn't too worried about unemployment because she really thought that it would automatically disappear once the economy had been freed from its shackles.

This is the woman of whom we have recently learned that she insisted on paying for a £19 ironing board herself - she had none of the greed of most people and I think she really did not understand it. For her, success went along with social responsibility - she was quite Victorian in that respect - and she really did not foresee the fragmentation of society she caused.

Erika, many thanks. On election I think you're onto something very important about Mrs Thatcher. Perhaps like many a True Believer she was, I'm sure, unworldly, almost innocent of the human effects of her own policies. So it won't do to blame her for the avalanche of greed and fantasy that she dislodged down the mountain. I think her faith that a free economy would sort everything was fundamentally materialistic. I also think she was largely making it up as she went along - her political skills were as an infighter on a tactical scale. Her only principle was to hang on in there by whatever means - no small achievement in context but, again, hardly behaviour on which to found a new world order.

I experienced this film as a story of an old woman with dementia and in grief trying to make sense of her past life and retain some control. Meryl Streep's acting is brilliant in this regard. It isn't either a documentary or a political study. Any real engagement with the political issues of the time are absent from this film.