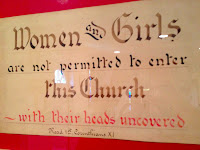 A course in Dignity at Work yesterday reinforces what every employer knows. In law and in fact, Discriminatory is as Discriminatory does. If a behaviour is experienced as belittling (and it is for the person who feels it to decide this, not the perpetrator), and it actually expresses itself in measurable behaviour, that's it. Discrimination has occurred whatever the motives or intentions of the perpetrator.

Imagine I open a Hungarian restaurant and refuse to serve anyone but Hungarians. I am discriminating against non-Hungarians. I may point out that I never served non-Hungarians before, or there are parts of the world where racial discrimination is legal, or my head office in Budapest likes me to do it, or any other excuse that comes to mind. I may even say Jesus is telling me to do it, but that is evidence I am crazy, not Jesus. None of it is strictly relevant.

Discriminatory is as discriminatory does, even if I have no conscious intention to discriminate, even if I cannot believe I am the kind of person who would do such a thing. Thirty five years ago I was once quartered with a Christian lady, call her Doris, who explained to a colleague and me that "darkies deteriate (sic) the area.” My more courageous colleague tactfully said he found this sentiment racist. Doris was horrified. Of course not. “If it were,” she said, “that would make me a racist, and I'm not.” Doris was wrong. Hers was a racist sentiment, and, thank God, less likely to be heard from a good Christian lady now, I imagine, than it was thirty five years ago.

In that spirit, it is more than high time for the Church of England to stop discriminating against women in its senior staffing. It really is as simple as that. Whenever this obvious point is made, howls go up from various Dorises that they have no intention to discriminate. We are not as other men are. When we discriminate it is not discrimination. Increasingly, this assertion seems merely ridiculous.

I was glad to read John Sentamu’s recent Telegraph interview on marriage equality, because the full transcript reveals just how little of it was actually about marriage equality. As sometimes happens, the newspaper concerned span the controversial bit largely out of a couple of stray comments at the tail end.

Most of it was moving testimony to how it has felt to be on the wrong end of one of the Church of England’s dirtiest little secrets — genteel and not-so-genteel Racism. When, back in the Halcyon days of the fifities the Windrush generation arrived, 90% of whom were weekly churchgoing Anglicans, we froze, humiliated and drove them out from our churches, often in a few weeks. John Sentamu has himself played a noble part in changing the Church the way it had to go, in the face of howls of protest from Doris and her compadres. It is a positive story looking a happy ending. That will come when the racial balance among clergy in parishes corresponds to the makeup of the communities we serve, and not before.

Now all that is necessary is for Sentamu’s colleagues in purple to join up the dots and get on with ending discrimination against women in bishop appointments. Whether they have the guts to do it now will say much about whether they have anything else of value to offer a society crying out for alternatives to materialism, prejudice, selfishness and apathy. Martin Luther said “The time is always right to do what is right.” After twenty years of ludicrous faffing and wiggling, the time to sort things out is now.
Posted by Bishop Alan Wilson

Indeed. And ditto to everything you've said above with regard to homosexuality.

I agree with everything you said with regard to racism and prejudice against women. Experiencing prejudice against women ( I was told by my dentist as a teenager that it wasn't worth girls going on to higher education as they just got married etc....) I realised something of what it felt like to be discriminated against because of race. Then when I experienced prejudice against women in the church (people walked out of church when I preached, would not take communion from me) I began to understand how those who were gay felt. So, I think it's way past time the church stopped discriminating on the basis of sexuality too. I really don't understand why John Sentamu doesn't make that connection with his own experience.

A more helpful post, Alan, and a more helpful discussion in the church at large, would be to set out those factors which should (in your view) determine suitability for senior posts in the CofE, with reasons.

I don't believe there is such a thing as right discrimination. Like any job, there are genuine occupational requirements, and there is a need to discern the gifts and call of God. To say, as some of our Victorian forefathers did, that God could not call a black to be a Bishop on the conscientiously held grounds that this violated Biblical teaching on the Curse of Ham was simply wrong.

An extremely helpful post, thank you for this. I do hope the Church of England sees the light and presses on courageously with the full inclusion of women (and then I hope to the full inclusion of gay people.)
If it is seen to continue to discriminate against women, I feel it can do nothing but harm to how it is perceived by society at large.

Alan, you are tilting at straw men. I am not in the least suggesting that racism has any part in the mindset of a Christian, and so it is simply false to use a right hatred of racism in support of treating men and women identically. Granted, there may be some similar arguments; in which case, please make them, on their own merits, rather than simply branding any opposition to women in leadersip as neo-Nazi racists.

And, in saying that there are genuine occupational requirements, you are of course advocating discrimination against those who do not meet the requirements. The point, as I made above, is that we need to decide what discrimination is acceptable and which is not. The alternative, to be indiscriminate in appointing leaders, would be to fail in our duty to God.

Again, please could you refrain from inflammatory rhetoric, and put forward what you think are (or should be) the grounds on which we should assess suitability for leadership in God's church?

Dear Mike, I am sorry if I haven't explained myself sufficiently clearly, but I am not suggesting treating men and women identically, just not discriminating against either gender. There are all sorts of grounds, as you know, in the Scriptures and elsewhere that should be used to assess suitability for all sorts of different roles in the Church, according to candidates' gifts and callings. Their gender, in itself should not be an automatic disqualification for any role to which it appears, on the usual criteria applied to it, a candidate might be suitable.

Alan, if you are not suggesting treating men and women identically, then you are discriminating. That is what discrimination means (as I have been trying to point out) [- per OED, To make or constitute a difference in or between; to distinguish, differentiate]. That is why there can be 'good' discrimation and 'bad' discrimination.

And I would still like us hear your views, in positive (and specific) terms, what the criteria for leaders should be. The Bible doesn't just talk in terms of gifts and calling, but also moral character - which (like gender) isn't directly related to the ability to do the job day to day. Do you see any place for requiring self-control (for example) in a church leader?

"discrimination" in your technical OED sense of the term isn't the problem, and is entirely covered by genuine occupational requirements. Nobody is compelled to empty one legged centre forwards or firefighters who can't carry the weight of a body. The problem is discrimination in the sense of the term that it is used in English employment law. I simply don't accept that moral character is a given like gender, or that it is unrelated to the ability to serve as a Christian leader. I don't see any of the protected characteristics given in the equalities act as disqualifying (properly) from Church leadership in themselves.