We come in Peace — Shoot to Kill? 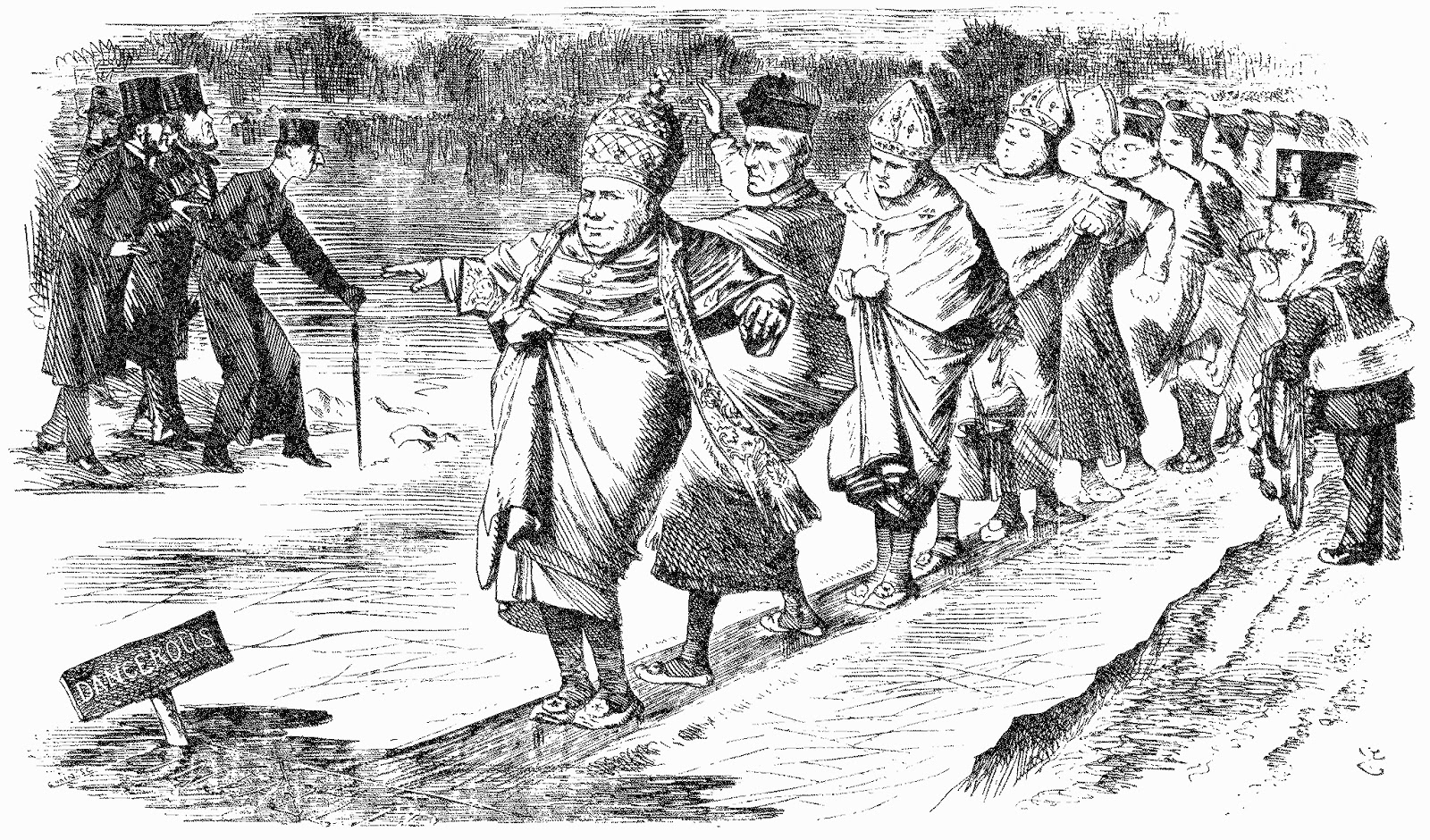 SLIDING ON THIN ICE
John Tenniel, Punch 1869
It is understandable that the anonymous author of the latest letter from House of Bishops (of which I am not a member), must, like Agag, “walk delicately.” Perhaps the best they could produce is what one early tweeter, retweeted by John Bingham of the Daily Telegraph, called “a masterclass in doublespeak, obfuscation and internal contradiction.”

The real issue was articulated by a member of the General Synod,  Simon Butler, who asked the following question at its recent session:


My question requires a little context and a large amount of honesty. I’m gay; I don't have a vocation to celibacy and at the same time I've always taken my baptismal and ordination vows with serious intent and with a sincere desire to model my life on the example of Christ simul justus et peccator. Those who have selected me, ordained me and licensed me know all this. My parish know this too.

My question is this: at the end of the process of facilitated conversations will the College of Bishops tell me whether there is a place for people like me as licensed priests, deacons and bishops in the Church rather than persisting in the existing policy that encourages a massive dishonesty so corrosive to the gospel? For my personal spiritual health, for the flourishing of people like me as ministers of the gospel and for the health of the wider church I think we will all need to have a clear answer to that question..


Clarity will need to emerge, then. We haven't got it yet. Is the answer to Simon’s question, “yes”? Well, apparently so. Recommendation One of the Pilling report states “We warmly welcome and affirm the presence and ministry within the Church of gay and lesbian people, both lay and ordained.” Surely the existing policy, with all of the moral drawbacks Simon enumerates won't continue, then? Well, apparently it will. Abiding by traditional teaching is the watchword. The massive dishonesty of which Simon speaks was not intentional. It was the only way kind hearted people could maintain what they understood to be traditional teaching in the real world. As it was in the disputes of the 1860’s the way things pan out will largely be settled by what people do, not  policy statements or sabre rattling. Whilst a great fan of facilitated discussions I am still fuzzy about exactly who will talk to whom about what and why. Also, if it is axiomatic that nothing will change, what exactly will the point be? We may be far gone in the hypocrisies of past years, but why add to them? Jesus had far more to say about hand wringing Pharisees than he did about gays.

If facilitated conversations are to mean anything, it's important not to derail them by what bishops do to the people with whom they are supposed to be talking in a safe space. Whoever wrote the new document is plainly out of their depth. Even after twenty years of listening, nothing much has been heard and the watchword remains “Life, Jim, but not as we know it.” Captain Kirk’s next line was “We come in peace, Shoot to Kill.” Adopting that now will not facilitate honest or productive conversation.

But where do I want it to end, I am asked, and where are the Bishops really coming from if the chips are down? two quotations came across my desk, by sheer chance, this morning:

One is from Sister Simone Campbell, a Roman Catholic Nun.


The Catholic hierarchy has done very poorly at engaging the issues of sexuality, period—their own, or anybody else’s... what we need is a real spiritual renewal among our leadership because for me, following the gospel means be not afraid—welcome everyone, hug them, welcome them close, and live and love.


The other is the gospel for the Third Sunday before Lent, year A, on which I am preparing a homily for tomorrow morning. St Matthew 5, and verse 37:


Let your word be ‘Yes, Yes’ or ‘No, No’; anything more than this comes from the evil one.

But it says nothing about Readers...

...so gay Readers would be OK to marry, because the Bishops don't think we count for anything?

(PS. I am not gay - simply pointing out the logic)

James, It seems to me are reading the implications of the letter accurately.

The letter from the House of Bishops is exactly as John Bingham describes it - the kind of speech that is soul-destroying to LGBT church members and to those who support their full inclusion in the life of the church. As a fellow Anglican, I read the letter with shock and dismay. I can only imagine the scope of the fear within the House of Bishops that would lead them to approve sending out such a letter.

It is ironic and tragic that this sort of soulless (sic) statement is published so soon after ++Justin's address to Synod , reminding us of the danger f being a church and people driven by fear and not love. AS we watch floods taking over swathes of the country and no one able to prevent the steady flow of flood waters, I find myself thinking of the story of Canute. This so-called pastoral statement reads like a desparate attempt to hold back the tide of acceptance of LBGT people in the church. WE know, they (the bishops) know that things have changed, but for some reason it is too scary to say so. I had hoped that the tendency to act as though being bullied was now disappearing from the House of Bishops - sadly, tragically for gay people and particularly at the moment for gay clergy, it seems it is still alive. There is something very sick and very fearful about the culture of that particular group.

James,
Lay Readers are not ordained, they therefore come under the heading of "lesser people than clergy" and can be a bit more immoral.
Only, it's up to their respective bishop.
When I moved in with the woman who is now my wife she had been a Reader for a number of years and I was in my last year of training. We were advised that if we lived together "openly" she would not be re-licensed and I would not be licensed so I might as well not complete my training.

I have seen nothing so far that indicates that the randomness of an individual bishop's prejudice over another's has been removed from the process.

It may be that the House of Bishops have inadvertently created the perfect weather for people to start crossing the line, and simply ignoring their policy.

It was obvious when Stephen Croft spoke on 'Sunday' this morning, that he realised that martyring clergy for making a lifelong, permanent commitment will be disastrous for the church, and that they will be very unwilling to do it. Fr Cain in North London is already insouciantly announcing his wedding plans on Twitter. Plenty of other clergy will go right ahead and get married. We might look back and see that this latest not-very-courageous move by the House of Bishops marked the beginning of the end of discrimination, because enforcement has become impossible or 'mission suicide'.

As a Reader I am appalled at what I am hearing from some bishops, and also some of the comments on this page re.so called Gay Marriage an oxymoron if ever there was one. Squabbling about the Lev. prohibition of same sex relationships serves no-one but to stand in opposition of the N.T. prohibitions is downright rebellion to the Word of God. And yes I have heard the foolish arguments batted around by liberal theologians and unbiblical clerics to justify their views and or behaviour. They change nothing. Frankly I am ashamed to have to admit that I am a member of a church which has bowed the knee to Baal and immorality in order to be popular. The Lord Himself warned us that the world would hate us as it does Him. There are amny wolves in sheeps' clothing within the Anglican church today; beware my friends they are deceivers and will have to answer for the men and women that they are leading into judgement.