Are we being Trolled, folks? 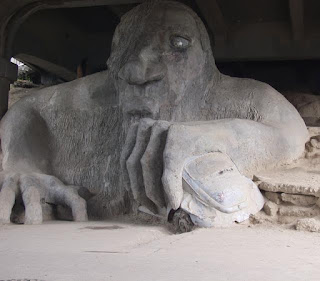 Did the Church of England resign its public role and become a private club when it gave up (where it did) on good ol' anonymous state matins in order to encourage committed faith, and build community between people?

Presumably, if this happened, it really wrecked everything for people who like religion "lite" and don't much like their neighbours.

The best of the piece, though, is a comment by a gentleman called John B. Murdoch (John, I wish I knew who you were, and I could go up and shake you by the hand) which is well worth all of us bearing in mind if and when we fill in Op-Ed comment boxes:

Folks, you are being trolled.

Note the advertisement that appears on the right hand side of this page: somebody (the ads change depending upon your demographics--I'm in the U.S., so I'm seeing an ad for a U.S. credit card company) is paying the Guardian a few cents to put an ad in front of you. And the Guardian, no fools they, is entirely happy to post flamebait topics like this one in the hopes that the atheists and the devout will do glorious battle--bringing in thousands of spectators to watch the Internet equivalent of a food fight. And getting a paid a few cents for every page view by the advertisers.

I've been active on Comment is Free for several months--and I've noticed that the Guardian editors periodically post blatant flamebait, seemingly goading the readership to fulminate over some issue or another. Why?

Because, first and foremost, they don't give a fig for principles or politics. They're out to make money--and by trolling you, the CiF reader/poster, they can generate hundreds of thousands of page views for their advertisers.

Give them their due--they're subtle. They don't post "Senator Craig Really IS a Wanker" topics or anything that blatant: they get semi-famous authors to deftly suggest that Princess Diana was a spendid mum, for all she was a tramp--thus provoking the defenders of Motherhood and Brittania and Monarchies to square off against the freethinkers and libertines. All the while the business office counts up the page hits, sends out the bills, and hopes the editors can figure out something more outrageous to post. ("Here, Alf--how's about sin and the Church? Could we get that chappie in Marketing to do that sock-puppet thing--writing something bright about atheism and such stuff in the comments as well? That'd stir the pot a bit...")

So before you take the bait, take a deep breath. Are they just trolling you, hoping to provoke you with yet another story on the same-old, same-old? Don't fall for it--make 'em work for a living, posting topics that provoke thoughtful discussion.

(Of course, that said--I just went totally ballistic over in the thread on Arthur Miller abandoning his child born with Down syndrome. So perhaps I shouldn't get all holy about this. 8-)