One way ticket to a madman destination... 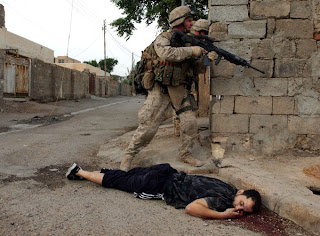 ...will you stop or will you just keep going?" What has the "surge" achieved, and where is it all going anyway, now even George Bush is using the "V" word?

It's been a disturbing year. General Tony Zinni, led the US Marines ably and effectively in the gulf, and afterwards back home. Now retired, his Terry Sanford Institute of Public Policy presentation at Duke (available for free on iTunes — just key in "Terry Sanford Zinni" to find a free audio or video podcast) tells it, pretty much, as it is from a military perspective — Iraq, failures, realities and the Future.

Thomas E. Ricks is the Washington Post Pentagon correspondent and Pulitzer Prize winning military historian. His analysis is now in paperback, and the title says it all — Fiasco: the American Military adventure in Iraq. It's a terribly depressing read (people suffering from a surfeit of cheerfulness after the holidays can get it on Amazon in a job lot with Bob Woodward's State of denial: Bush at War part III).

In Ricks' view not only have many people died on all sides, many of them innocent bystanders, but the effect of the whole thing has been to destroy US credibility and stoke up terrorism. "Effective tactics harnessed to bad strategy equals military disaster." He investigates how the US could start a pre-emptive war based on false information (step forward Paul Wolfowitz, among others), and tracks carefully through the disastrous resulting imbroglio.

His Afterword ("Betting against History") suggests one of four denouements:
Is there a 5th scenario?