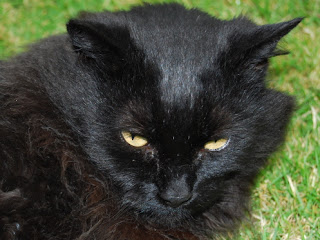 Spook went missing 10 days ago, and this afternoon Lucy found his body under the neighbours' hedge. He'd found himself a place to curl up and die, and there didn't seem to be any violence involved.

Tears all round, really, as Spook was RSPCA's best — a teddy bear of a cat. He was, er, big boned. People used to ask whether he was pregnant, which would have been something of an achievement for a neutered Tom! He wasn't really overweight, just very stocky. Lucy and I must have spent days combing out the tangles in his coat; something he completely hated, but was very tolerant about. "It doesn't do to be sentimental about cats — the best ones don't respect you for it" (Susan Howatch), but Spook was a very special part of our lives, and we're all feeling rather droopy.
Posted by Bishop Alan Wilson

Condolences and prayers. A cat loss is a serious loss indeed and nine years a gloriously long time to have with a cat!

Many Thanks, Huw, for your kind thoughts. Max (our other cat, and Spook's brother, though they look completely different) is also a bit sorry for himself...

This morning, though, we saw two foxes playing together in our garden, with a great litheness and freedom: I know we're not supposed to approve of them, but they were having great fun!