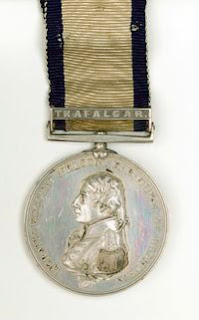 Today, as any British scholboy would have known between 1805 and 1914, is Trafalgar Day.

The Army and Navy Gazette of 23 July 1896 contained a poem by Rear Admiral Ronald A. Hopwood, setting the unwritten rules for survival in the Victorian Navy. Its principles apply to any corporate life, even that of Christians, who are urged in II Timothy 2:4 to aim for military standards of discipline and corporate loyalty.

Lack of recognition:
If ye labour from morn until even,
And meet with reproof for your toil,
It is well — that the gun may be humbled,
The compressor must check the recoil.

Being able to rely on others:
On the strength of one link in the cable
Dependeth the might of the chain:
Who knows when thou mayest be tested?
So live that thou bearest the strain!

Leave:
When the ship that is tired returneth,
With the signs of the sea showing plain,
Men place her in dock for a season,
And her speed she reneweth again.
So shalt thou, lest perchance thou grow weary
In the uttermost parts of the sea,
Pray for leave, for the good of the Service,
As much and as oft as may be.

Lack of recognition:
If ye win, through an African jungle,
Unmentioned at home in the Press,
Heed it not: no man seeth the piston,
But it driveth the ship none the less.

Anger directed at authority:
Dost thou think, in a moment of anger,
’Tis well with thy seniors to fight?
They prosper, who burn in the morning,
The letters they wrote overnight;
For some there be, shelved and forgotten,
With nothing to thank for their fate,
Save that (on a half-sheet of foolscap,)
Which a fool “had the honour to state — ”