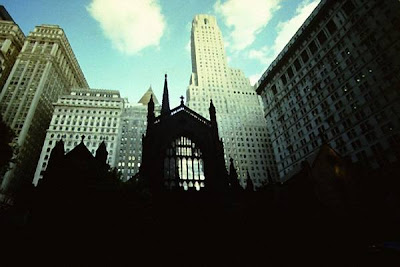 In both this year's priests’ ordination charges, I quoted this book, and promised to put a reference on the blog and didn’t — until now.

Gordon McKenzie was a creative at Hallmark Cards — a creative corporation (oxymoron?). Like “the Hewlett-Packard way”, every institution develops routines, traditions, assumptions and party lines that keep everything on the rails but can stifle creativity. Governments create schools that actually kill off Childrens’ capacity to imagine and create. Churches begin as revolutionary lifestyle movements and develop their own institutional “Giant Hairballs” that steal the show in the end.

One solution is just to blast off and start again, but that lonely path jettisons a lot of reality and connectedness. Alternatively, you can be trapped by the giant hairball, and surrender to its inevitability. There is another way — to orbit the giant hairball, valuing its core strength, yet refusing to allow it to kill of your imagination.

Here's another picture of organisations from Chapter 18: 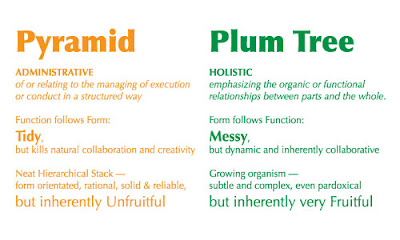 Now,
Which is the Church supposed to be? the possibly surprising answer is BOTH. It isn’t an Either/or, but a both/and. Jesus talked of building towers, and growing trees secretly. Gordon McKenzie has an image of the plum tree growing out of the side of the pyramid.

If this is what the Kingdom is and how it works, all “Conservatives versus Radicals” custard pie fights, in your parish, in your village in your communion, are, in themselves, as foolish as pretty much everyone knows in their heart of hearts they are, anyway. They're an invitation to grow up and get real. Hallelujah!