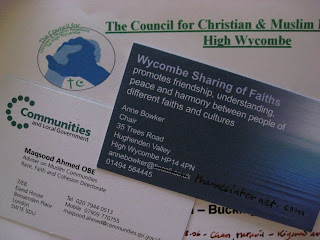 Buckinghamshire New University, to help launch the Council for Christian & Muslim Relations for High Wycombe. This body isn’t something downloaded from the centre. It began with spontaneous meetings between religious leaders following the 10/8/06 arrests in Wycombe, led by Chaudhry Shafique and Revd David Picken, Team Rector. It was a great honour to share a keynote slot with Dr Khursid Ahmed, from the British Muslim Forum.
There’s already a developed faiths sharing network in the town. This enterprise is about building community. 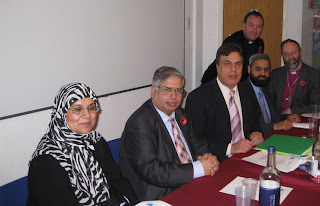 The launch and seminar was backed by local imams, clergy, school leaders, and representatives from the Council (including Valerie Razzaq, mayor), Mohammad Azaz (recently appointed Thames Valley Police Community & Diversity officer), Dr Ruth Farwell, (University Vice Chancellor), Matthew Kitching (President of the Students' Union), and Paul Goodman, local MP. Paul is personally deeply engaged in promoting community cohesion on a national level, as well as locally. The panel for questions included Rahida Khazi, educationalist. It was really good to meet Maqsood Ahmed, Government adviser for Communities and Local government. It’s always humbling to be part of something that’s high powered on all fronts.
This faith-based regeneration network is about “tolerance plus” — understanding and respecting everyone for who they are with their particular identities, rather than patronising, synthesising or homogenizing them. 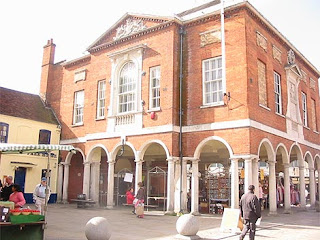 One big issue is perceptions. Local press are usually professional, well earthed and informed, but national media can be gobsmackingly ignorant and biased. After the 10/8 arrests a national TV channel carried a headline picture of the evil mosque where everything was planned — a foreign looking building with a dome — actually St George's Church Sands! You'd think the ten foot Cross on the roof would be a hint, but that's religious illiteracy for you. Tom Davies, journalist in Northern Ireland in the early 80’s, told me years ago how they used to set up kids to throw stones for the UK papers. 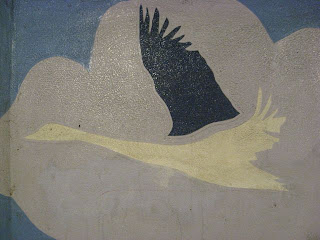 Global perceptions have a local impact. An information society really does need clean information. That's as big a challenge in the current climate of hysteria and ignorance as it is for communities to relate to their own young people, and articulate their positive aspirations in the public square. Wycombe is one community getting together to build respect and understanding by taking on these challenges, and I was proud and delighted to be part of this launch.
Posted by Bishop Alan Wilson

Good to hear about the launch of the Council for Christian & Muslim Relations for High Wycombe. Congratulations from the national Christian Muslim Forum www.christianmuslimforum.org!

Friends in High Wycombe may be interested in our imams and ministers conference on 28/29 November (see our home page). Hope you don't mind me attempting a small plug. I would be interested to make contact with the organisers of the group.

Great to hear from you, Julian. Thank you for your encouragement for what we're trying to do in Wycombe. I'm sure David would be interested to know of the conference. There's a church website: http://www.allsaintshighwycombe.org/

I have to say that the only time I've ever (yet!) not published a comment on this blog was when I did the piece on Iftaar in MK, and some kind gentleman sent in a bunch of references to hate sites on the internet as his contribution to the subject! It's so much more encouraging to hear form you. Do say if I can help in any way, ever.