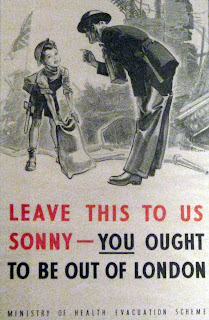 “Wish me luck as you wave me goodbye.
With a cheer, not a tear,make it gay.”

Really? Well, Gracie Fields and the Ovaltineys did it like that. Anyway our First consignment of excess stick insect eggs has gone off to South Wales. You’ll remember the Lord blessed Tinky the Stick Insect real good, and she produced seed as numerous as the sands of the sea. Faced with a plague of phasmids in a few weeks time, I panicked and various friends stepped in, including Richard Hall. Yesterday I loaded a couple of dozen little eggs, weighed and polished, into a tic-tac box for safety and packed it in bubblewrap. It’s over to the post office now. I hope they keep them warm at night. I’d like Richard to raise them as good Methodists, with a passion for social justice and appetite for committee work. 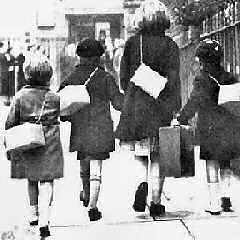 If you get stick insect eggs in the post, you put them in a dish within a tank or other contained space, out of direct sunlight. It’s important they don't dry out (watch that central heating) or go mouldy with damp. What seemed to trigger the hatching in ours was having fresh bramble leaves nearby, but that could be an old wives tale. These were laid between July and November 2007, and should hatch sometime between now and October. 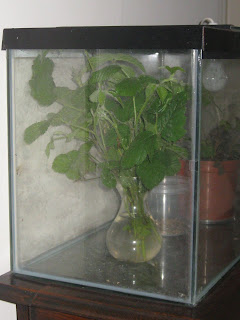 What happens is the pot top pops out, followed by a coiled up nymph that looks a bit like a scorpion. The back unrolls, and they start exploring vigorously, usually with the little pot hanging off the back right leg. It will come off in due course, about an hour. Sometimes the leg comes with it (Isn’t nature marvellous?) but I'm assured legs can grow back. We have a pot of brambles with young shoots at the top nearby, sealed with kitchen roll at the bottom to prevent insects falling in and, er, that's it. Some websites report babies dying within a week or so through failure to latch onto feeding shoots or, more commonly pesticides on their brambles (Womble poison?) We’ve tried rose, eucalyptus, oak leaves and Raspberry cane, but Tinky was a Bramble girl for preference. 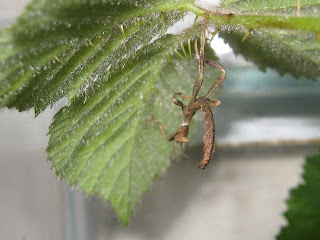 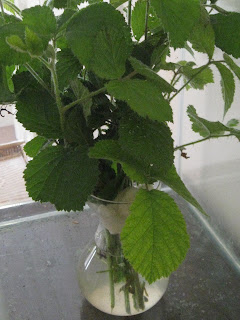 Finally, just to get the facts of life straight, these are female eggs produced asexually by females. The males have bigger wings and fly (ooh, scary). These have dinky little wing cases and chomp leaves all day. If you want males, you can mate these with petshop boys, but we don't allow that sort of thing round here. Play your cards right, and you could have, er, up to 3,600 females of your own around September 2009. A right old playboy mansion...
Posted by Bishop Alan Wilson

Hurrah! And thanks. I'd better go and get another tank, then...

Hi Richard. Hope everything gets there all right your end.The big issue with newborns is that they don't half leg it round the place. Our tank has a fitted cover and it's been useful. When they get older they just hang on the branches, so mobility isn't as much of a problem.

I hope these pictures give some idea of the set up that's worked for us...