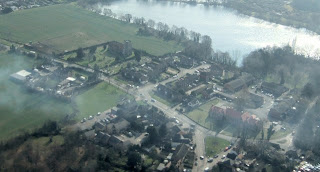 Many people flying into Heathrow Airport notice Horton Parish Church on their way in, close to the end of the runway. Fr Simon Douglas Lane is energetically building the kingdom in Wraysbury & Horton, and it was a great joy to confirm there yesterday — a great step into discipleship for 11 newly committed Christians from the villages.

Anyway, it’s narrow chancel and I couldn't help noticing that I was actually standing on the grave of the poet John Milton’s mother Sara! 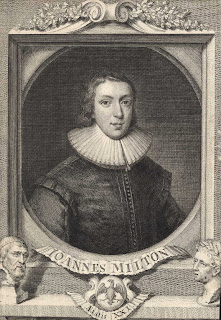 we see Milton’s high ideals of conduct between the sexes as deriving from his mother and his relationship with her... Milton’s mother was a typical housewife and mother of the seventeenth century: one who bore children (at least six), who took care of the home for the father and the children as needed, who was guided by her husband, who was the focus around which domestic and extended family life existed...
John Shawcross, John Milton: the self & the world 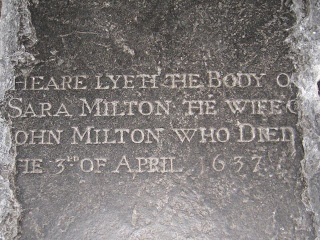 ...and there was Sara 371 years later, er, under my feet. This job does yield weird experiences for the historically minded. William Kerrigan says “the death of Sara Milton was the first step in lifting the spell that bound him to his home.” Another example of real parental love — “Selfhood begins with walking away, and love is proved in the letting go.” (C. Day Lewis). 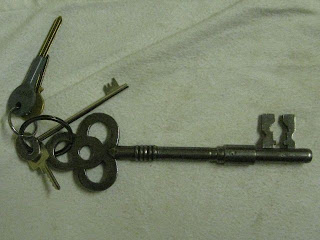 Then, back to earth with a bump, I turned on the computer and hit Tim Chesterton’s percepive, thoughtprovoking and updated ideas about having a happy marriage. These include two thoughts that have often occurred to Lucy and me, albeit in less distilled form — “Love is a choice, not a feeling,” and “a marriage needs a mission.” 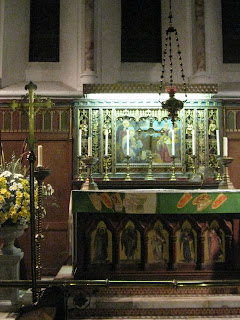 At a time of uncertainty about relationsips and the future of the family, we witness to Christian marriage not through politicians, but by doing it ourselves: “Tell the truth to each other... live a simple life focussed on God and your neighbour... being a better folower of Jesus will make you a better marriage partner.” You can’t scold people into sacramental union with each other and God, far less politick them into it by harsh, sour posturing. You just have to live it, hoping and praying they’ll discover it.
Tim’s piece comes back down to earth with a bump at the end: 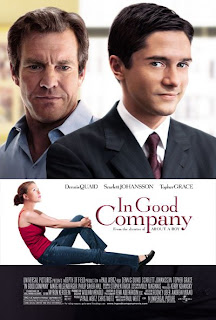 a word for the guys from the character played by Dennis Quaid in the movie In Good Company. When asked by a younger man what his secret of a lasting marriage is, Quaid's character replies, “You find the right person to get into the foxhole with, and when you're out of the foxhole, you keep your dick in your pants”. Every time I've shared that story in mixed company, the women have shaken their heads about how offensive it is, and the men have nodded their heads, knowing that 'lowest common denominator' wisdom is often a good place to start...!!!

Not quite John Milton, but sound advice for starters, perhaps. I am sure far more hurt and damage is done to people by good ol’ fashioned infidelity than by emergent moral issues since the sixties...