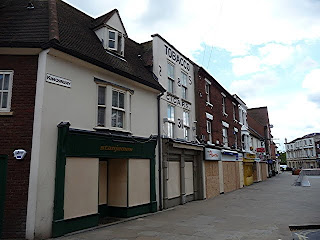 Day out in Aylesbury with Frs Shane Wood and David Cloake, as the EDL came to town. Lord knows why Aylesbury, but the day demonstrated clearly the strength and cohesion of the town, in the face of major frustration and annoyance. However unwanted it all was, it did bring people together. I spent the day on walkabout with visits to the TVP Silver Command, Jamia Ghausia Mosque, and Young People’s activities at CGS in Southcourt, among other places. 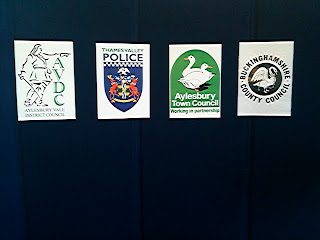 The tiny but good humoured UAF event at Vale Park, whilst basically irrelevant, was no bother at all. The EDL have been trying to build numbers on their outings, so will doubtless be disappointed by a modest turnout. There was only one public order arrest, with a small number of others for offensive weapons and, inevitably perhaps, one drunk and disorderly EDL member. There’s always one. The day demonstrated great patience, professionaism and good humour from our police and emergency services. An Al Jazeera reporter commented, on the basis of experience all over the world, on the “gentlemanly” way TVP had approached a pretty daunting task. 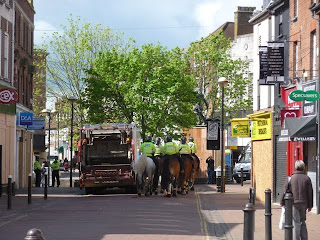 Above all, the day saw a basically good humoured, cohesive community cope, mainly cheerfully. Most people, wisely, stayed away. I feel really sorry for the town’s small traders, innocent people, who have lost thousands of pounds so that EDL could indulge their ignorance and insecurity in public.

One or two aspects of the day struck me as quintessentially Engish.

Sad about the lost income for the local businesses, especially in these hard times, just so the wingnuts can have their little show and day out.

I didn't know that the English called the far right wingnuts, too.

Spent some time with a small taxi firm in New Street, and they were understandably fed up. Even worse for market traders, I'm afraid.

all part of the cost of living in a democracy, but don't think it's fair most of that cost is borne personally by families and businesses.

Having seen how healing this perspective was on the streets of Aylesbury today, I wonder how this perspective, combined with the need to show wingnuts up for what they are, and not be taken in by grandiose hype and rumour, could help us within the Anglican Communion!

As an aside, my nickname at school was 'Wingnut' - big ears you see.

From the perspective of a cleric, yesterday was difficult in so many ways, but also it feels like yesterday did so much good behind the scenes. It was (and always is) an honour to have a place in the lives of people where I could draw alongside, share some banter, and to say 'we are here with you'. I married a wonderful couple for whom this had been stressful in the days before - so the value-added at the moment of the Ceremony was palpable given that hatred did not hinder true love.

Aylesbury and the Vale is so much stronger today. The radicalised voices were silenced, literally and figuratively, on all sides. The people of this amazing place stood their ground, and they prevailed. May God bless them all.

hi bishop alan,looks like you had a very fine day i am pleased,i do have some concerns though,i didnt realise a man of the cloth resorted to name calling im refering to the expression wingnut here,also i thought true christian belief stemmed from seeing both sides of the argument,to me personaly what side you take dosent matter but to your flock wether they be lost or not it may seem you have closed the door to your particular church,you should be reaching out to the people with the message of jesus christ rather than worry about wether or not you are seen to be doing the politicaly correct thing by drinking tea for a living,next time could you please share your time with descendants of your church and enlighten them.I would be more than willing to pop along to your church and have a civil debate with you perhaps you may share a cup of tea with me also. the kindest of regards darren.

Yesterday was a great example of the community rallying together and showing that they do not support the actions of the beliefs of the "English Defence League".

Whilst we accept that the price of living in democracy is the right to free speech were the hundreds of thousands (or even millions) of pounds of lost business and trade worth it to the EDL? They don't care about the harm they cause to communities and social cohesion that people like Bishop Alan work so hard to promote.

The EDL knew that the town did not want them but continued anyway. Bishop Alan's picture of him enjoying a cup of tea and a Samosa will the enduring image of that day and show everyone that the town of Aylesbury does not agree with the racist aims of the EDL.

The moderate mainstream will always win out against the bigoted extremists. For an organisation supposedly against "extremism" they behave like a bunch of extremists and thugs themselves.

Dear Darren, Thanks for sharing your concerns. If you look at Fr David's comment above you'll see there is life after being called a wingnut. I have cups of tea with all sorts of people; as, doubtless, you do.

True Christian belief stems from faith in Jesus Christ, loving God, loving your neighbour as yourself, reading the Bble, praying, that kind of thing, and not from going around threatening your neighbours.

Excellent! Especially because it's true.