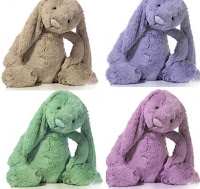 Dr Robyn Skinner, psychotherapist, once had a patient with a most annoying habit. He always brought along a stuffed toy rabbit, a mysterious authority figure that was assiduously consulted before any critical decision. The presence of Mr Nibbles was lucrative for Dr Skynner, but seriously inhibited progress with the gentleman’s condition. Theological discussions involve sensitive personal matters, and participants often bring along their stuffed rabbits — mystery authority figures.

There’s a Vatican Gold one —
“we’d love to, but what would the Pope say?” Well, the real Pope has always shot straight from the hip about womens’ ordination. He abominates it lock stock and barrel. He even came up with the ordinariate, a tiny but perfectly formed exercise in what Southern Baptists call sheep stealing, that leaves no room for doubt.

There’s the Biblical Literalist one —
Oh, we all know God didn’t do the job in seven literal days, but the nursery narrative says could have, and we want to play safe. On gender equality most people know the score. The most avid “complementarians” do allow their wives to bob and cut their hair, to speak about faith, except in Church, to lead teams containing men. They’re part of a Church whose supreme governor is a woman. The English settled the real issue about whether women could ever, as a matter of Creation ordinance, hold positions of authority over men back in 1569, and it’s generally worked out fine since.

Finally there’s the dog eared old rabbit called “nice.”
All manner of murder and mayhem, backstabbing and worse, go on at the Vicarage. Only we must be nice about it. In fact, none of us are as nice as we like to think we are, but the pretence continues in the face of considerable evidence to the contrary if only we behave well. Nice is full of “yes, buts.” I first encountered it in the form “We’d love to have a Cheshire home in the town, but we can’t let people in wheelchairs dent our property values.” yes, But... It’s anything but nice. And in present circumstances another canter round the paddock for this question is anything but nice.

This week the General Synod reaches a final vote. Stuffed rabbits sometimes help make it possible to talk together along the way, but they can't help with final decisions. Best vote according to your positive convictions, one way or the other. If you believe women cannot be bishops, you couldn’t live with yourself if you voted any way but against. Nobody would expect otherwise. But the reverse is also true for those who do believe women can be called by God to the episcopate.

It makes no sense at all to anyone to consult any stuffed rabbits any more. Everyone has compromised, including those who believe in a non discriminatory church. The idea that another trip around the gasworks on this subject will deliver traditionalists anything better in eight years’ time seems, frankly, insane. That could only happen if a new synod represents a final retreat into the ghetto, because the direction of travel on planet earth is plain as a pikestaff, and it's the other way.

After years of trying out every conceivable permutation a compromise has been reached that leaves almost everybody unsatisfied. The only process grounds left involve the notion that a statutory instrument is too far short of a statute to protect people — a somewhat top shelf legal concept that is simply untrue in any other area of life.

Time to leave Mr Nibbles out of it and vote according to conviction. Time to move on.
Posted by Bishop Alan Wilson

Should I be anxious then that my grandaughter took one of my cuddly / stuffed rabbits to Church on Sunday then?

We don't hear, "What would the pope say?" here in the US, at least not where I live in south Louisiana. A good many members of our congregation are refugees from Rome, and the other large number are Baptist refugees, so what the pope would say doesn't count for much. It amazes me that a good many English folks still seem concerned about what the pope thinks.

As for the Synod vote, as a "concerned" sister Anglican, I shall pray God's will be done.

There's at least one more hidden stuffed rabbit that is hiding in this debate.

The dogma that equality requires sameness.

But logic (or reality) is - of course - no answer to dogma.