Worth at least a thousand words

Dave Walker has been bringing clarity to the three options outlined in the Manchester Report — absolutely brilliantly. The one that caught my eye was his graphic depiction of option III (“3 non geographic dioceses”). Pretty much says it all, really. 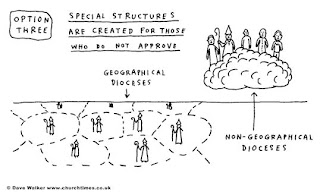 So it’s over to the politicians of the General Synod now. To paraphrase the Prophet Amos (3:3), (as genteely as possible) the fact is that, er, two half bottoms do not a whole bottom make... 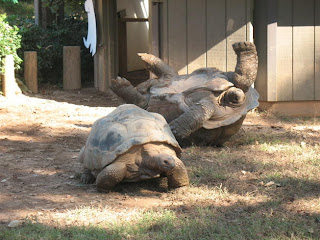 As is only right, immense amounts of care have gone into trying to help out those opposed to women’s ordination. Various schemes, (such as TEA), were ingenious attempts to square the circle, but apparently did not help the people for whom they were designed. A strong code of practice alongside the legislation will help everyone engage with reality charitably. Because of the way this discussion has been almost entirely framed around the objections of opponents, people may forget other salient facts:

There's another problem with gradualism, when it means "dragging one's feet" and not "making a change slow enough to adapt to," which is that you lose people along the way. It was one of those pronouncements about how the church would never accept women as priests, or as bishops, that made me decide to leave it. If I wasn't welcome for full participation, I wasn't goiung to support it as a follower. I think that thousands of women probably made similar decisions over the years and that the secular decline of the church has much to do with a silent boycott. People haven't lost their need for community, their urge to help others, or their hunger for spiritual comfort. They've just moved on to other, secular sources, from the environmental movement to clinic defences to New Age snake oil.

Thanks, Mona. I see the truth of what you're saying. Given that you're never going to take all the old brigade with you, and the new brigade don't exist yet, doing the right thing here requires considerable faith.

But doing nothing can make it even worse. Institutions that become locked into badly handled change can become magnets for people who enjoy punch-ups in themselves; rather like drunks on a Saturday night in Glasgow seeking out the nearest good fight, regardless of how it started. They then have the biggest vested interest of all in keeping the fight going...