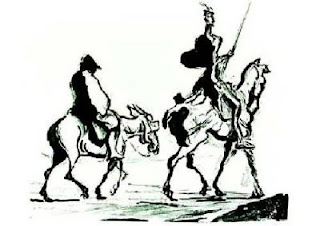 Now, imagine Mrs Doyle got her own TV show to pontificate about Soccer, films, rollercoasters, fishing and sailing. You don't have to imagine. She has been, only it isn't Mrs Doyle, it's Mr Dawkins, and the subject isn't any of the above, it's religion, superstition, homeopathy and faith — topics he has as much feeling for (and understanding of) as Mrs Doyle has about her pet hates.

However fluent and vituperative someone may be, however clever they think they are, anyone who can't see all kinds of difference between water dowsing, fortune telling, Roman Catholicism and Islamism, plainly doesn't know diddly squat about any of them. Soccer, film, rollercoasters, fishing, sailing and shouting are manifestly not variant forms of the same thing, as anyone who knew anything much about any of them could tell you.

The simple fact is that millions of people all over the world experience God in all sorts of diverse ways all the time. Like all personal encounters these experiences are multi-faceted, unpredictable, impossible to standardise or often even to describe. Yet it happens every day. You could try and understand what's going on, or you could simply rubbish anyone who doesn't share your own antique brand of naïve materialist positivism as mad, bad and/or dangerous.

One reviewer (Wackos IV: the child of science) suggests the whole show is essentially infantile. James Hannam gives one historian of science's view ("I suppose his fans will lap it up, but Dawkins is rapidly turning into a caricature of himself"). I'd also like to note two other reactions.

(1) The UK Guardian newspaper carries a perceptive and thoughtful analysis by John Cornwell, director of the Science and Human Dimension project at Jesus College (University of Cambridge) called The Importance of Doubt. Cornwell suggests that Dawkins

simply does not get the point of pluralist societies under secular auspices. Nor does he credit believers with the capacity to be pluralists and democrats, even though members of the great world religions have contributed to the formation and preservation of pluralism, and resistance to its opposite - totalitarianism - in the modern period.

Put bluntly, The God Delusion is liable to persuade religious fundamentalists that a pluralist secular society is every bit as hostile to the practice of faith as they ever thought it to be. By urging the elimination of religion in the name of all that civil society holds dear, Dawkins is inviting fundamentalists to be even more fundamentalist. His book, then, is a counsel of despair as well as an incitement to the very thing he deplores and seeks to remedy.

Meanwhile the UK Satirical magazine Private Eye, has its own spoof script for the Dawkins show. This piece isn't on the web, so you'll just have to go get it from the news stands, but here's a taster:

Professor Richard Dawkins (for it is he): It is frightening to think that in the 21st century there are millions of people all over the world who believe they can change the future by a simple act involving a birthday cake.
cut to shot of family group clustered around Marks & Spencer chocolate cake covered in lit candles. Woman blows out candles while the rest of her family shout 'go on, mum — make a wish!." Close up of woman with eyes closed, accompanied by sinister music. Cut to Dawkins, looking shocked and incredulous.

Dawkins (interviewing woman): Mrs Simpkins, can I ask you what you think you were doing just now?

Mrs Simpkins: Well, I just made a wish while I was blowing out the candles, like I always do.

Dawkins: And you really thought that what you were wishing for would in some mysterious way come true?

Dawkins: As a Control test, tell me what it is you wished for?

Family: Don't tell him, mum, or it won't come true.

Well, you get the idea. Here's the conclusion

Dawkins: So there we have it. Everyone in the world is mad except me, and very, very dangerous.

Just what will Cornwell say after Dawkins has invaded Poland!

I don't suppose Dawkins will be invading Poland soon. But his thesis is that Religion causes people to do dangerous things they wouldn't (by implication) do if they were secularists. I think that whole linkage is naive. I dpon't actually buy it, but suppose for a moment it were true. If so, you'd expect societies built on secularism to be less violent and abusive. Looking around the great secularist societies of the last century in China, Russia, Albania, East Germany, SE Asia, you count the corpses in millions, not thousands. They make the Spanish inquisition look like a sunday school outing, and Id be interested in Dawkins' view as to why this should be so.

Goodness me! How did you find that reviewer! He's wise every now and then I suppose but then I would say that as I married him ;oP

And Cornwell should get a grip on reality. Dawkins is not Hitler ( a confirmed believer in God), or Stalin ( a seminary student)

'The simple fact is that millions of people all over the world experience God in all sorts of diverse ways every day in their lives.'


Why did such a sincere believer as Mother Teresa experience nothing, despite her desparation at God's silence, and her anguish at not being able to sense any prescence of the being she worshipped?

Steven, any spiritual director will tell you relationships with God go in and out of focus, subjectively, all the time in exactly the same way as relationships with anyone else. Read St john of the cross, and you will find a precise description of the phenomenon.

There's no point trading statistics over who killed most. The biggest slaughter in English history turns out to be, er, the Battle of Towton of 1461 (where they were all, interestingly enough theoretically the same religion, or lack of it.)

The point is, Secularist regimes were manifestly no less bloodthirsty than any other in human history.

Stalin's mature views on religion, incidentally, were almost identical to Dawkins — look at the old Soviet encyclopaedias on the subject.

Was Mother Teresa not sincerely looking for god when her relationship 'went out of focus'? (Not exactly the way she described it herself)

Secularist regimes were no less bloodthirty than those regimes led by people who 'experience God in all sorts of diverse ways every day in their lives.'

I'm not disagreeing with you....

Yes, she was, Steven. John of the Cross says (if I remember aright — it's a very complex and subtle bit of poetry) that this phenomenon only affects those who are sincerely seeking after God!

Yes indeed, Alan, St John of the Cross makes a great distinction between those who experience a lack of faith in God because they are distracted by sin and those who go through the dark night of the soul because the seek God.