Ten Rules for cooking up a Gay Schism 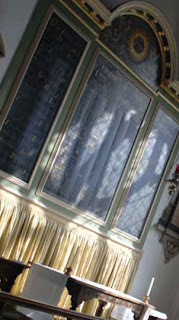 Oh dear, oh dear, oh dear. Are we wobbling off piste? Reporting the same Lambeth Conference launch, Riazat Butt in the Guardian concludes “Gay Climate of controversy clouds Anglican gathering” whilst, probably more accurately, Ruth Gledhill of the Times reports “Sexuality will barely be on the Lambeth Conference agenda.” The blue train is wobbling on the tracks, friends. Entirely as an exercise in communications studies (and not theology, you understand) may I humbly propose a facetious little something to help keep this thing rolling, along the lines of Fr Ronald Knox's Ten Rules for Writing Detective Fiction?

1. Nobody must ever win outright. Every complexity must be reduced to two simple contradictory positions, or the readers lose interest. Whoever heard of a boxing ring with a blue corner, a red corner, a green corner and a pink corner? Forget it. No question raised in the dispute may ever have a particular answer, and every particular answer must always be twisted to produce a further generalised question.

2. All supernatural or preternatural agencies are ruled out as a matter of course.

3. The Archbishop of Canterbury must always be brought as directly as possible into everything. His Grace is always right in principle, but wrong in practice.

4. Wrap up your proposed next step in each particular event you report, and you can sustain interest. As in Volleyball, drop the ball and the game's over.

5. Reference can only be had to a very limited number of real Anglicans, or the public will become confused and lose the plot. In particular it is necessary to cover up the almost complete lack of manic anxiety about this subject in 99·99% of Anglican parish churches in the world, and confine yourself as much as possible to internationally rated single issue fanatics. You've got their numbers, and they are very talkative.

6. Litigious Yanks, or, even better, Litigious Southerners, bring plenty anger to the plot, but their actual legal system is complex, finely balanced and basically fair. American litigation is even more boring than American football. Therefore the rule when reporting US courts is quick in, quick out. Sound-bite the result, but for Pete's sake, don’t get bogged down in the contents or process.

7. Only Africans with American PhD's can be allowed to appear in the story. No Indians, thank you. Forget Canada. Remember Voltaire? Even with global warming, it's still only miles of snow.

8. The Bible is a powerful iconic juju, but you mustn't ever open it, or people will tumble to the simple fact that there is next to nothing directly about “gays” in it — not surprising since the word was first used this way in 1934 by Cary Grant. “Homosexual” dates from 1892. 4 out of 31,240 verses makes Jack a dull boy. Again, keep it general, and keep it moving. It’s OK. Most of the punters never read the Bible anyway.

9. Ecclesiology is a very long word. Don't go there, except for the anoraks on your blog. You have to pretend that the Church of England is a reduced form of the Roman Church at all times, because in fact autocephalous churches are structurally incapable of having schisms in the Roman sense. If that got out the game would be up. Dust over the line between “province” and “diocese” at all times — like Iran and Iraq. For most of the public, what the hell's the difference anyway?

10. The Reporter must not, themselves, be homosexual. Or if they are they must pretend not to be. As far as in you lies, keep everyone talking about somebody else at all times.
Posted by Bishop Alan Wilson

(as a famous non-Anglican once said)

I don't know... It seems that these folk for whom their stance on homosexuality is a biblical imperative joined(or were brought up in) a tradition which reflected those values as its own in the not so distant past...

...shouldn't the tradition deal with them gently? Otherwise do we not have unsympathetic folk treated by those they now disagree with unsympathetically?

And to be fair, a lot of folk labeled as 'homophobic' within the anglican fold are sympathetic they just have a view on the practice - which I'll admit is fairly warped but that was the general view not so long ago... Of course if we just talk of them as if they don't care it's so much easier isn't it?

Thanks for this. I find all sorts of people have all sorts of stances on this which they hold as a biblical imperative. But I think I also see a really helpful insight in what you're saying, about the way we grow up assuming things about cultural topics from our context. They may be absolutely correct, but we need to source them where they belong, or we risk losing touch with Scripture as is.

I think we should deal with everyone on a deeply personal subject gently.

I hardly ever use the term "homophobic" because it seems to me to make assumptions about other people's motives which just can't be proved and probably aren't true. The only labels I'm comfortable with using about other people on personal subjects are labels they would own themselves. That's why the only people I'd ever call fundamentalist would be people who owned that name themselves. There's a vital distinction between name calling and honest discussion, and I want to stay the right side of that line.
Many thanks... There's a lot of subtlety about many English people's view of this, surely.

I see the point of some of these. But, you know, point two is just about obligatory for anyone trying to write secular journalism, and you won't like the attitude to truth shown by those papers most favourable to praeternatural explanations. Would you rather have yourself reported by a paper with a horoscope or without one?

I think that we, the press, ought faithfully to report how the participants in these stories see god acting in them. But we have no reason whatsoever to suppose any of them are right about this. The reader is free to reach their own conclusions.

And, you know, both Ruth and Riazat might be right in their reports. It's not on the agenda, but the gay business or the struggle against "liberalism" will shape almost everything that happens at Lambeth, who attends, and what it can safely discuss.

Thanks, Andrew. Points taken. Number 2 was lifted straight from Ronnie Knox, and its function in the spoof is to anchor the piece to Mgr Knox, rather than an earnest appeal to journalists to report God directly. It does flag up, however, a major gap between the assumptions of many protagonists and those reporting them which is part of the story. I agree 110% with your conclusion about what real journalists should do.

One of the things that strikes me as strange about this whole gay story is the complete disconnect between the significance that a very small number of rather unattractive zealots (on both sides) see in it, and everybody else. In the South of England many basically Conservative Anglicans I meet are embarrassed, conflicted, or bored by the whole issue. In India it's way, way off the radar — almost unthinkable. In San Francisco there's a much more public debate, loaded in a progressive direction, no doubt. But what sainted imperialism gives Westerners the right to export a their row and visit it on everyone else? That's the Bp of Jerusalem's point, perhaps, and I have to admit to some sympathy with it. If I read Stephen Bates aright, there has certainly been big manipulation going on behind the scenes to try and turn homosexuality into a kind of Charlie Manson Helter Skelter thing. That's an exciting intellectual notion, but of course, a complete non starter on the streets. So who reports the perpective of 99.9% of the Church, as opposed to the 0.01% Helter Skelter boys?

Finally what interests me in the reporting of this story is the possibility that some Westerners hook onto it as a place in which usually anti-Gay feelings can be expressed which would be impolite if not unexpressible in other contexts. It's Grace Davie's theory about latency, where the Church becomes a safe symbolic arena in which to discuss what people can't quite bring themselves to back in the office. I wonder if that's one of the things that gives this issue far more velocity than it would have had 20 years ago?