Weaving the Rainbow in Wycombe 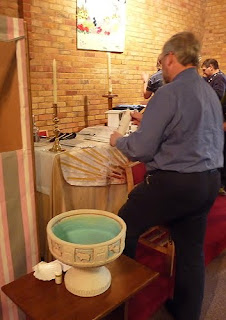 Rainbow Worship is a regular outfit based at St Birinus and St John High Wycombe, which started four years ago and increasingly draws in several dozen people with learning difficulties from all around, to network, celebrate, and worship. It’s a congregation that’s started from the other end, not so much trying to jam people into conventional observance as to allow simple and engaging expressions of love and prayer to emerge from a very diverse crowd. 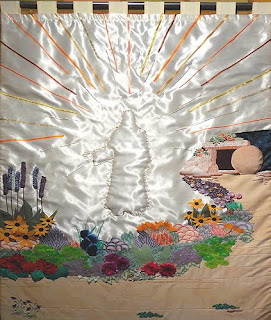 RW is rumbustous and celebratory some of the time, but hushed and awed at others. Comments are chipped in from all around as things happen, like an ol’ time revival meeting. Craft actvities are built in, and the management has radically tried to break down the distinction between client and helper. On one occasion, as Noah’s Ark was revealed in all its glory, a loud voice cried from the back, “This is one I made earlier.” 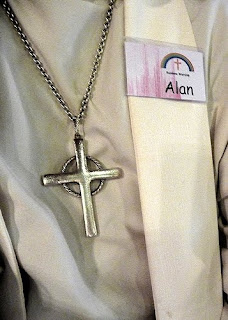 Last night I confirmed six members of this community. It’s extraordinary how live it feels praying with people who have no “side” or pretensions, but simply respond instintively in the moment. Highlights included a Creed delivered to thunderous band in clubbing style, melding into a sea of friendly, open faces, dancing and banners, and losing myself in the joys of dance with a marimba. One of the first things I believe we will lose in heaven is self consciousness, which will be subsumed in self-awareness, and the tingling joy of being alive, as death is swallowed up in victory. That’s what we did last night anyway. A lot of us came away feeling we had had a trip to the cleaners — and that doesn’t always happen when we worship, does it? 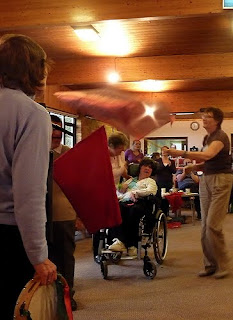 I found it the experience of a lifetime to bless, anoint and confirm in such a place. There had been modest anxiety in the setting up about how some would cope with the touching and liturgics.
Actually, it was a liturgical stroll along a moving walkway, to call people by name into the kingdom, to anoint them as a sign that they are royalty with the King of Kings, to bless on the basis that “God has called you by name and made you his own...” 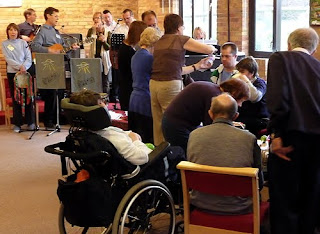 Although the language of inclusiveness is politically usable, I don’t actually think it quite covers such experiences. “Inclusiveness” assumes there is a some thing that really belongs to “us” (whoever we are) into which “they” (whoever they are) need to be “included” preferably by the things “we” do for “them.” This did not feel like that at all. 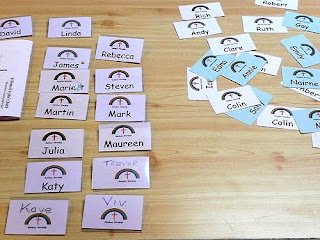 The truth is that we are all exceptional people, all fearfully and wonderfully made, with varying awareness and ownership of what makes us exceptional. Some people with learning difficulties have far more of this than the well-heeled. The real emergence of something heavenly occurs naturally when we all embrace our exceptionalities — why should we wish to be deceived? — and lose ourselves in the emergent transcendence.

One interesting little piece of inclusiveness though, was the inclusion of Morag who founded and leads the group. She was stuck in Switzerland waiting for a plane, so was skyped into the event on one of the worship leaders’ laptops.

It was the first tme I had seen that done in a confirmation, and it somehow affirmed the irrelvance of geography, as well as “disability” to the proceedings. 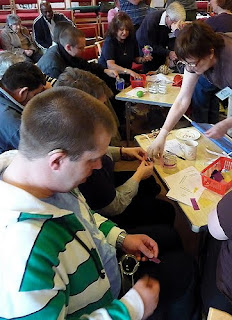 Many thanks to Steve the Vicar, Morag, Roger who led the talk, craft leaders, and Jay who led much of what geeks would call the Synaxis, and friends, including Scratch the Preacherman Dog.

When you get to heaven it will seem a more natural carry-on to you than it wll people who have been further up themselves on earth, because you will have been practising first.
Posted by Bishop Alan Wilson

... and so challenging. Very moving, thanks for posting this special piece.

Alan - you captured the evening perfectly....sorry I compared you to a chess piece- I was confused- thank you for coming and leading such a great evening...Bless you
From Scratch the Dog and his friends

Thanks for you comments and for coming to Rainbow Worship last night.It was truly a privilege to be part of something so special. Jo

Thank you for coming to Rainbow Worship last night and your comments. It was truly a privilege to be involved with something so special. Jo

Sorry if I have sent too many comments - I had to re-do it several times as I didn't think it worked!

Bishop Alan, this is one of the loveliest posts I've read in a long time. You conveyed well the sense of the occasion as somewhat like a wee glimpse into heaven.

One of the loveliest phrases I learned from my time recently as a co-leader of an emerging church group for disabled people was "disability infusion".

'Inclusion' sometimes means "we're doing something and we will be gracious enough to let you join in".

Infusion is what happens when we dunk a tea bag in water - the essence becomes part of it. The whole thing becomes something new, something so much better than just a dry tea bag or just a mug of hot water.

I have sometimes learned more wisdom from my friends with learning disabilities and profound autism than I have from many scholars, and I am truly blessed to have that honour. In turn, they are so welcoming of people like me, who struggle to see people at all and get so much wrong as a result.

I'm ever reliant on people helping me and being clear what they need from me, and it is such a blessing to find that. We all yearn for a society where those with a disability are truly welcomed as 'one of us' with so much to offer.

Thanks to all for kindness and hope — sorry to forget Scratch the dog. First time I've confirmed with the assistance of a talking dog, too. Don't know quite how I forgot that aspect of the evening, but it was pretty intensely amazing, and some detail had slipped my mind. Sorry, Scratch.

Ann, I loved your "infusion" concept, which takes seriously the $64,000 question you identified about inclusion language. It's important to work against discrimination in a way that doesn't frame the issue discriminatorily (watch my language!) on a meta level.

"Thanks for pretty information about this topic"
Depression is like a black curtain which inflicts melancholic feelings over lives of individuals. Depression with itself brings hopelessness, helplessness, lack of energy, sleepiness and low energy levels. Although, this kind of feelings may differ from one person to another, its effects stand as unswerving hurdles in one’s life. Depression is a serious mental condition which interferes in one’s professional, emotional, physical and mental life. There are various kinds of depression which may be triggered by different causes. The symptoms can be diagnosed by a mental health professional.

thank you for all the hard work